PIXOTE: A LEI DO MAIS FRACO (The Law Of The Weakest)

Casting homeless boys as actors (their performances are extraordinary), basing the script on real-life stories, and opening the film with a discussion on the evils of poverty, director Héctor Babenco’s Pixote is a lesson in politically committed film-making. Filmed before Babenco’s queer classic Kiss of the Spider Woman (1985) and before the international mega-hit City of God (2002), Pixote laid down the foundations for all of his remarkable work. Rejects of society, these children are born without a future, and grow up with guns as toys, police chases as games, drug-smuggling as work. The film tells the story of a group of Brazilian boys, including the hard-as-nails but immature Pixote and the much abused but proud transgendered Lilica. They meet after they are sent to a Reformatory, which in fact (just like Magdalen Laundries and Industrial Schools in Ireland) is a concentration camp where they are routinely abused and treated as slave labour. When a few of the boys manage to escape, they discover that surviving in the outside may be just as difficult. They become a family, and they seem to be indestructible, until love, jealousy, and the adult world intrude in their lives. This savage film is often tough to watch, but it is an eye-opener, and a must for anyone who cares about social justice. An absolute classic.

Warning: the film contains some scenes of violence, including sexual violence, which some Film Qlub members may find disturbing.
For membership http://www.filmqlub.com, or at door on the day 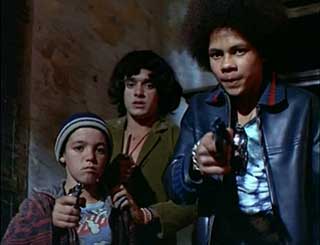