Directed by Kerry Crabbe
Richard Ryan Promotions and The New Theatre,Dublin are delighted to announce the return by public demand of The Pitch by Shane Connaughton.

Audio Clips of the show
To hear a short clip click here.
To get a podcast about the show from Dublin’s Newstalk 106 click here

The Pitch set in Cavan tells the story of Philly Halton “a renowned Gaelic footballer in his own mind”. This poignant tale of an old man living in isolation on his own land with forces conspiring to relieve him of the very pitch on which he played his greatest games. The Maguires his bitterest enemies have hatched a devious plot to consign him to a nursing home for the rest of his days.
See what transpires in this ferocious and comic drama of emotion and language.
Shane Connaughton plays the part of “Philly” with Jack Moylett as “Maguire” and a young girl caught between the warring factions in this brilliant Irish production directed by Kerry Crabbe.

About Shane Connaughton
Shane Connaughton is an award-winning writer and actor who has appeared in many stage and screen productions, including Coronation Street, Mike Leigh’s Four Days in July and Neil Jordan’s The Miracle. His screenwriting credits include My Left Foot (nominated for an Academy Award) The Playboys and Dollar Bottom (which won an Academy Award for ‘Best Live Action Short’). Literary prizes for his fiction include the Hennessy Award and the George Devine Award, and he has been the subject of two television documentaries for the BBC and RTE.

About Kerry Crabbe
Kerry Crabbe has worked extensively as a writer, director and producer in film, TV and theatre. He collaborated with Laurence Olivier on a series of TV films; was Associate Director at the Oxford Playhouse; and wrote Memoirs of a Survivor (starring Julie Christie) and The Playboys (with Shane Connaughton). He was invited by Harold Pinter to adapt his only novel The Dwarfs for the stage at the National Theatre, he runs the Monty Python-founded Club Panico for young film-makers, and he has taught widely – from the London Film Academy to a UNESCO film training unit in Zimbabwe. 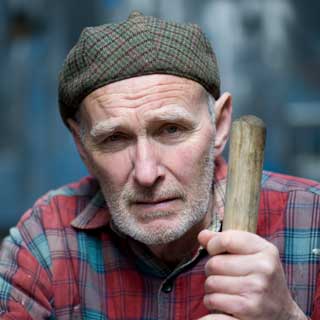