Velvet Revolution is an exciting new play from Truman Town Theatre. Having dazzled audiences in Kerry and Mayo, the drama is now set to make it’s powerful debut in Galway. In typical fashion, the drama is dialogue based with lots of wit, sarcasm and black humour.

Fyodor and Shelly are a young couple living in an undisclosed town in the rural Ireland. Shelly is the beautiful seductive blonde that torments the insecure Fyodor with her adulterous antics and behaviour. Using only two actors, and a minimal set, the Play is a feast of tension, humour, suspense and ultimately a delightful illustration of the bizarre Irish psyche. from writer Mick Donnellan, that brought you sell-out shows such as Sunday Morning Coming Down (Sold Out National Tour 2011) Shortcut to Hallelujah (Sold out tour of Connaught 2011) and Gun Metal Grey (Sold out Galway Theatre Festival 2011) This is a show to be hotly anticipated and not to be missed!

“led by an impressive Cathal Leonard”
“sufficient humour to bring tears”
“this is powerful theatre.”
“a fresh and original voice in Irish theatre”
Irish Theatre Magazine

About Mick Donnellan
Mick Donnellan is from Ballinrobe, Co. Mayo. He completed the M.A in Writing at NUIG in 2004. Having traveled for a number of years, he now lives in the West of Ireland. In 2009 he worked with Druid Theatre under the New Writers Programme. At present, he is Writer and Artistic Director with his own company – Truman Town Theatre. Last year his play – Sunday Morning Coming Down completed a national tour with Truman Town. Other productions in the last twelve months include Gun Metal Grey (Sold out Galway Theatre Festival 2011) and Velvet Revolution. In 2011, he co-wrote the award winning series Lucky Run (Winner of The RTE Storyland Competition 2010) with writer Colm Cafferkey and Producer Eamon Stack. Mick has worked as a journalist and editor in Vancouver, Canada where he established a now thriving Arts paper called – Urban Pie. On the side, he also worked with the Celtic Connection Newspaper, writing articles for the Irish who had emigrated, helping to get their name and qualifications out to potential employers. In February, 2012 his novel El Niño was published and is slowly climbing up the Best-Seller lists. (Available at Charlie Byrnes, Dubray Books, The Bell Book & Candle and on
www.originalwriting.ie) You can contact Mick on mickdonnellan@hotmail.com.

About Kate McCarthy
Kate McCarthy, originally from Clonakilty in West Cork completed the MA in Drama and Theatre Studies in NUI Galway in 2011. During this time she completed modules in Ensemble Acting and Devising as well as participating in corporeal mine classes with Blue Raincoat Theatre Company based in Sligo. In the past she has completed examinations in both Acting and Speaking Verse and Prose in association with the London Academy of Dramatic Art. Previously she has worked with Galway based company Trench Entertainment in Tell Tale William and has had roles in Galway Youth Theatre productions including The Ugly One and Love and Money as well as working with Macnas. She completed Core Theatre College in December 2011. Kate has previously worked with Truman Town Theatre in the sell out show Shortcut to Hallelujah. Following this was Gun Metal Grey for the Galway Theatre Festival 2011, and most recently Velvet Revolution which toured Munster, Mayo and Galway.

About Cathal Leonard
After training for one year full time at Bull Alley Theatre Training School in Liberties College Dublin, Cathal left the world of theatre to focus of third level education where he earned a BA in History Sociology and Political Science. He then completed a Masters in Political Violence and International Security in Queens University Belfast. Upon completion, Cathal joined Truman Town Theatre in February 2011 and since then has performed over 80 times with the company in venues such as the Townhall Theatre Galway, Bewleys Café, the New Theatre in Temple Bar, Glor Ennis, St Johns Arts Centre Listowel and the Linnenhall Arts Centre in Castlebar. He has played lead roles in the company’s other major productions including Sunday Morning Coming Down, Gun Metal Grey and Velvet Revolution. Cathal now regards himself as a full-time actor and is eager to break into film. He can be contacted on cathalsean@gmail.com. 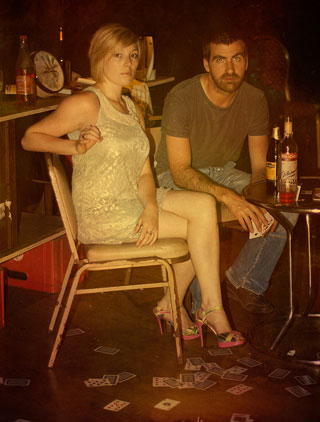