Dylan Tighe, director of The Irish Times Theatre Award-winning no worst there is none, returns to the Festival with this stirring new project which explores depression and the concept of “mental illness” with courage, imagination and humour.

Sharing his vision of a system that dismissed options and choice, this alternative opera is based on songs from Dylan’s debut album, also titled record. Using medical records, autobiography, fiction and 16mm film, record is a brave and evocative production, which speaks honestly about what society sometimes deems taboo.
Dylan Tighe will also present SAMPLES, a series of free discussions and other events dealing with mental health.

Dylan Tighe presents SAMPLES, a series of discussions and events exploring the influences, sources and themes of his project RECORD. These events aim to explore and shift consciousness around the representation of mental health.

Supported by Dublin City Council and Create by arrangement with the Dublin Theatre Festival. With partnership support from Arts & Disability Ireland.
All events are free and take place at The New Theatre, 43 East Essex Street, Dublin 2. No booking required. Please note that the ‘Talking Theatre’ event on Sunday the 7th at 3pm is a Post-Show event.

Friday 5 October
11am / Doctoring The Mind
A short presentation by Professor Richard Bentall, followed by a discussion with Dylan Tighe.
Richard Bentall has held chairs in clinical psychology at the universities of Liverpool and Manchester, and is currently Professor of Clinical Psychology at the University in Wales. Known internationally for this research into the causes and treatment of severe mental illness, his previous book, Madness Explained: Psychosis and Human Nature won the British Psychological Society Book Award for 2004.

1pm / Re-Imagining Distress
Panel discussion with Prof. Richard Bentall, Bobby Baker, Sean Burn, John O’Donoghue, Mary Maddock & Dylan Tighe.
Richard Bentall, is the Chair of Clinical Psychology at the University of Bangor and author of ‘Doctoring The Mind’ and ‘Madness Explained’. Bobby Baker is one of the most widely acclaimed and popular performance artists working today. Sean Burn is an English writer, performer and outsider artist actively involved in disability arts. John O’Donoghue is the author of Sectioned: A Life Interrupted Mind Book Of The Year 2010. Mary Maddock, author of the book Soul Survivor, a founder of MindFreedom Ireland, an organisation which campaigns for a non-violent revolution in the mental health system.

3pm / Re-Writing Distress
Presentations by writer John O’Donoghue and writer and artist Sean Burn.
John O’Donoghue is the author of Sectioned: A Life Interrupted, which won Mind Book Of The Year 2010. He is also has several published poetry collections and teaches Creative Writing at the University of Westminster.

Sean Burn is a writer, performer and outsider artist with a growing international reputation. Actively involved within UK disability arts, he was shortlisted for a Dadafest disability arts award in 2009 and earlier this year completed a major residency at the new gallery Walsall in association with DASh (Disability Arts Shropshire) where he worked to ‘reclaim the languages of lunacy’.
Presented in association with Dean Scene Writer’s Group, St Patrick’s University Hospital.

3.15pm / On the Drawing of Breath: A presentation by Bobby Baker
In this illustrated talk acclaimed British artist Bobby Baker will explore how painting, breathing and madness led her to create a remarkable series of diary drawings. Bobby Baker is one of the most widely acclaimed and popular performance artists working today. She was trained as a painter at St Martins School of Art but, on leaving, found cake and performance more effective ways to express her ideas.

In her career of 35 odd years she has, amongst other things, danced with meringue ladies; made a life size edible version of her family to be eaten by visitors; driven around the streets of London strapped to the back of a truck screaming at passers-by through a megaphone to Pull Yourselves Together and cured thousands of her pea patients with their many ‘unreasonable’ psychological and behavioural problems through her Therapy Empire How To Live. Bobby Baker’s acclaimed Diary Drawings exhibition was first shown at the Wellcome Collection in London in 2009, and continues to tour internationally.

The talk will be followed by a discussion with Dylan Tighe about her work, including her performance practice. This event is supported by Arts & Disability Ireland.
ISL Interpretation, Speech to Text and Loop will be available for audiences who are deaf and hard of hearing.

3pm /Talking Theatre: Dylan Tighe in conversation with Prof. Ivor Browne
Ivor Browne was Professor of Psychiatry at University College, Dublin and Chief Psychiatrist of the Eastern Health Board. Browne has published many articles such as: An Experiment with a Psychiatric Night Hospital (1960); Psychiatry in Ireland (1963); The Dilemma of the Human Family: a cycle of growth and decline (1966); Thomas Murphy: The Madness of Genius (1987), How does Psychotherapy Work? (1989), Psychological Trauma or Unexperienced Experience (1990).

September 27 – October 14.
This year Dublin, her stories and storytelling are at the very centre of the Festival as audiences are invited to celebrate Your City, Your Stories. The 2012 programme is an exciting mix of Irish work, including 12 world premieres, and some of the very best international work. The Festival will include over 500 performances across 32 theatre productions, staged in 19 venues over 18 days. 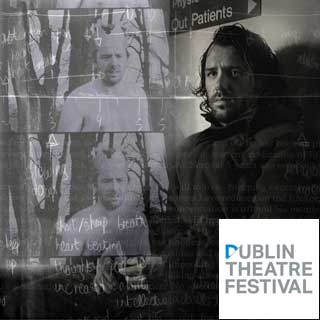 Contains nudity and scenes of an adult nature.