“Four women. Four stories. One profession.”
Set in a brothel in rural Ireland, this tale of female empowerment focuses on the turmoil and inner struggles that four prostitutes face whilst under the unchallenged control of their pimp. Throughout the course of the play each woman will be forced to face up to the reality of their situation, ponder their fate, and realise the universal need that binds them.
Directed by Steven Masterson
To listen to an RTÉ Arena report on Bound click here.

About Derek Masterson – Writer/Producer
Derek is a Graduate of UCD having studied English and Psychology (B.A. Hons). He has written and directed five professional productions within the last four years including the controversial Teller ; based on a true story Five Minute Flight, and most recently, the critically acclaimed Opportunity Knocks. He has written for several showcases around Dublin and been commissioned to write for children’s stage. The majority of his writing is taken from personal experiences and blended with surrealism (and exaggerated!). In 2009 he founded No Tears Productions to aid and encourage new writing in Ireland and hopes that his theatre excursions will one day lead him to a career in writing for the big screen. Bound is his sixth show to be staged and is considered by most to be his most daring work to date. It is also the first occasion he has given sole control to a director to stage a piece of his new writing.

About Steven Masterson – Director
Steven trained as an actor with Bull Alley Theatre Company and holds an Associate Diploma in Drama, certified by Trinity College, London. A versatile actor, he played many roles with Bull Alley including Reverend Hale in The Crucible, Dougie in Strippers, Van Helsing in Dracula, Macduff in Macbeth and Christian Faber in Noel Coward’s The Astonished Heart. Since graduating last May, Steven has forged a career as an actor, playing television roles in Behind Bars for TV3 and Idir Mna for TG4. Stage work since graduating includes the lead role of Charlie in No Tears Production’s Opportunity Knocks and a nationwide tour of Rudolph The Musical. As a director he has directed musical productions of Oliver! and Charlie and the Chocolate Factory for Clones Theatre Group, Co. Monaghan ; A Night of Comedy with Crumlin Senior Citizens, and eleven variety shows with his stage school over the past five years. He is delighted to be making his professional directorial debut with Bound.

To read a review of this show on qualitywaffle.ie click here. 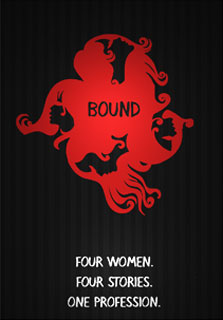