Not While There’s Work To Be Done

“You’re playing senior hurling now lads …”
Not While There’s Work To Be Done is a play set in the darkness of rural Connemara where James and his son Colm have left home to look for a stray mule. Tonight this seemingly simple task will prove to be anything but as they encounter adventure and strange characters beyond their wildest nightmares that are intent on diverting the pair from their chore.
Nothing is as it seems for James and Colm who over the course of one night unwittingly walk from Connemara to Sligo looking for their lost mule as their odyssey takes them back into the heart of a superstitious old weird, rural Ireland struggling to comprehend the coming modernism.

About Thomas Quain – writer / director
Thomas was born and partly raised across the ‘sunny south east’ of the Country. He completed a Degree in Film + TV in Galway in 2010. He spends his time engaged in writing short films, plays and anything else that takes his interest. His work been accepted into many National and International Film Festivals. Thomas can be contacted at insanityfactory64@gmail.com 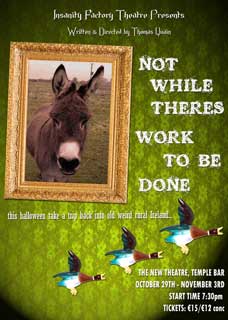