Click is a witty yet poignant story of two lifelong friends trying to survive.
On a fishing trip to Croatia, Pauly and Jacko, stroll through a field when Pauly hears a click. Panicking that he has just stepped on a defective land-mine left over from the war he stands rooted to the spot afraid to lift his foot. As they wait for rescue talk turns to life, love, limbs and what it means to be a modern man. As the hours pass not only are their lives in jeopardy but so is their friendship as buried secrets threaten to destroy everything.
Directed by Caroline FitzGerald 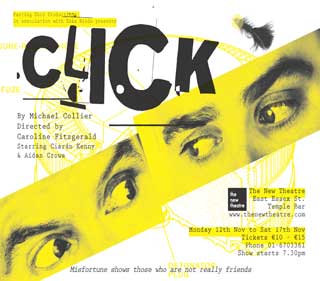