A thrilling tale about the power of sexuality to unsettle social norms.

Not as well known as it should be, this film stands amongst the most beautiful, exciting, original, and provocative films ever made. And it is a lesbian classic. Val Lewton, who wrote the story and produced the movie, knew all about lesbians — he’d been raised by a famous one, his aunt Alla Nazimova, a superstar of the silent screen and the daring mastermind behind the queer film Salome (1923).

After 1930 in the USA, with the Hays Film Censorship Code in place, it became almost impossible to discuss sexuality (or politics) on film, so people like Val Lewton had to get really creative. Enter Irena, a Serbian woman from a strange race of creatures, half-human and (unknown to the world) half panther. Does it sound daft? Well, the film is actually very stylish, performances are flawless, the camera work and editing are magic, and the story is so compelling that you’ll be glued to the screen from start to finish.
Irena knows it is not in her nature to marry, because she is likely to kill her husband when her ‘true self’ returns. When she foolishly ties the knot with unsuspecting Oliver, not only she finds it impossible to have sex with him, but she can’t help herself either from ‘hunting’ women – including complete strangers in public swimming pools and deserted night streets.
Actress Simone Simon, who went on to make an openly lesbian film, is absolutely magnetic. But momentarily, Elizabeth Russell steals the show … as a fellow panther alerted by her ‘gaydar’, who approaches Irena: “Are you my sister?” We predict that after this screening you’ll be uttering those very words to unsuspecting punters in the Front Launge and Pantibar … and you’ll do it in Serbian! An irresistible film. 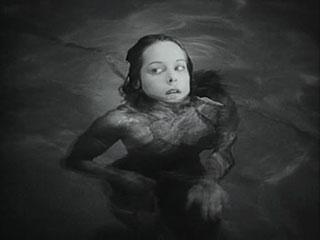