A queer celebration of working-class biker culture
Bikers, who doesn’t find them sexy? They are free, unconventional, they make their own roads. And there’s the leather gear, or at any rate the body-hugging pants and blazers that keep the chill at bay. Most importantly perhaps, their know-how of all those mysterious mechanical bits seems to promise competence in every other department.

The early 1960s marked the reign of the Harley-Davidson and —on this side of the pond— the Triumph Bonneville. We’ve all seen the classic American biker buddy movie Easy Rider, an epic which defined a generation and a favourite film with the boys. Then there is the cheeky and often disturbing film Scorpio Rising, an obscure and experimental gay ode to bikers, directed by Californian queer underground hero Kenneth Anger. And now, we would like to introduce you to the third film in the gang, a quiet, modest, semi-mainstream British movie of the same period, which tends to be overlooked in gay film histories: The Leather Boys.

In the film, young biker Reggie is disappointed with married life, but fellow biker Pete is happy to provide the support and love that Reggie needs. In some ways, The Leather Boys is a film about marriage, and how it can artificially change people’s behaviour. In other ways, the film is concerned with gender, and the absurd expectations on women and men of a certain generation, who thought themselves free but were only repeating old patterns. The Leather Boys is also about friendship, and the support and loyalty which only comrades (whether they are our buddies or our spouses) can offer us. Of course, what we love most about the film is that this biker gang is a transparent metaphor for the gay community and for gay culture, thriving on the margins, beautiful, and proud. Also, we love the film’s suggestion that there is a ‘queer biker gene’ dormant in everyone, which may just awaken if you throw that damned GPS away. 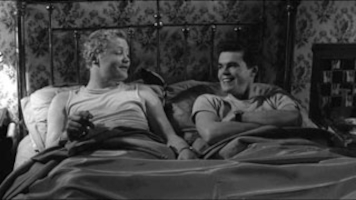