The Land Speaks Arabic (2007)
In this award-winning documentary the late nineteenth-century birth of Zionism—and its repercussions for Palestinians — is detailed with original source documents, quotations from Zionist leaders, rare archival film, the testimony of witnesses, and interviews with historians. All help to show that the expulsion of the indigenous Arab population from Palestine was far from an accidental result of the 1948 war but was a deliberate policy.
Directed by Maryse Gargou. In English, Arabic, and Hebrew, with English Subtitles.

2:30 p.m.
Bassem: Story of a Martyr (2009)
Bassem Abu Rahmah was a non-violent anti-Apartheid Wall activist from the West Bank village of Bil’in. On 17 April 2009 he was murdered by the Israeli military when he was shot at point blank range in the chest with a tear-gas cannister.
This tragic and moving film, the first directed by the award-winning director of Five Broken Cameras (2012), looks at the situation in Bil’in through the lens of Bassem’s short life.
In Arabic, with English subtitles.

3:05 p.m.
Peace, Propaganda, and the Promised Land: US Media and the Israeli-
Palestinian Conflict (2004)
This film provides an analysis of American and international media coverage of the crisis in the Middle East, zeroing in on how structural distortions in American coverage have reinforced false perceptions of the Israeli-Palestinian conflict.
It analyses and explains how, through the use of language, framing, and context, the Israeli occupation of the West Bank and Gaza remains hidden in the news media.
This film is perhaps more important than ever as the recent Israeli assault on Gaza has seen the exporting of the type of shallow reportage, distorted in favour of the Israeli narrative, to screens in Ireland and Europe.
Directed by Sut Jhally and Bathsheba Ratzkoff. 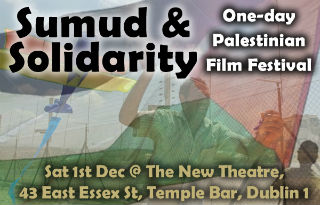