Homophobic drivel, or gay propaganda? Take your pick!
Veit Harlan had been a prominent director of nazi propaganda films for the Third Reich. What on earth is he doing in 1953 making an educational film to (supposedly) instruct parents on how to recognise and erradicate homosexuality in their kids?

Here’s a little known and rather surprising fact: while the nazi regime was crushed and then collapsed in every front, the nazi film industry remained almost intact. A brilliant German director like William Dieterle (you may remember him from our Season One), who had gone to the USA to escape the nazis and had devoted his energy to antifascist activism.
He discovered, upon returning home that he couldn’t find work as a filmmaker because the old guard was still in charge of the film studios. People like Leni Riefenstahl and Veit Harlan managed to ellude the War Crimes courts despite their dubious CVs. So, why should we still watch their films?

Many would point to the need to separate art and politics, but images are never neutral, they are always the product of the ideas and beliefs of those who make them. Yet we shouldn’t ignore these films, nor should we burn them, like the nazis did themselves with many ‘degenerate’ artworks (including a few gay movies) which are now forever lost. We need to face this legacy, and do it with our eyes wide open.

All of these issues may be important, but they won’t quite prepare you for this rather ambiguous and often very enjoyable film. Is Veit Harlan for real when he suggests that cubist painting and electronic music (the then new musique concrète style) are sure signs of homosexual tendencies?
Is he for real when he claims that naked Graeco-Roman wrestling is all the rage at underground gay parties? How come his film-queers are more intelligent, sensitive, and articulate than his heteros?
Is his sympathetic portrait of a concerned homophobic father not in fact a pisstake on a ridiculous and hysterical patriarch who is ruining everybody’s fun and wrecking his own family’s sanity with his outdated prejudices? Well, you will have to watch the film to decide for yourself.

About EVIL SEASON “MAD, BAD, AND DANGEROUS TO KNOW”
screenings @ 3:30 pm
doors open @ 3 pm
come early and join us in the foyer for free tea & coffee

Important Notice:
Our schedule is subject to change due to availability of films from Film Distributors.
Our next season will offer you another exclusive selection of fantastic LGBTQ films which are either little known, or completely forgotten, or which have failed to get the attention they deserve. We are calling this season the “Evil Season: ‘Mad, Bad, and Dangerous to Know'”.
After our roller-coaster Season Two, “Around the World in the 80s”, we are traveling back in time to the 1940s, 50s and 60s (we will be stopping in 1968, the year Stonewall changed gay history).In Season Three, we are going to take a look at some gloriously gay films from Hollywood, made under heavy censorship but managing to tell amazing queer stories in exciting new ways. By contrast, we will also look at the freedom of European films of the period, talking about homosexuality with a mater-of-factness which is often shocking.

All our films for Season Three have one thing in common: they deal with evil — evil gay, lesbian, bisexual, transgendered, and queer people, yes, but also with the curse of internalised homophobia, and with the horrors of a society that cant cope with black sheep. Some of our films have great gay baddies, other films pretend to condemn us so they can publicize gay culture, and others are about people who are dying for an opportunity to be “bad”.
In short, in Season Three we will see some of the lesser known but most intelligent portraits of gay people ever created, we will laugh at society’s boring obsession with normalcy, and we will also celebrate evil. That’s right, we will embrace the “intrinsic evilness” that Mr Ratzinger finds so scary, and we will celebrate it. Because, lets face it, it has been a blessing for many of us — enriching our lives with excitement, fun, tenderness, friendship… not to mention some truly fantastic films!
Evil Season. It’ll be a thrill. 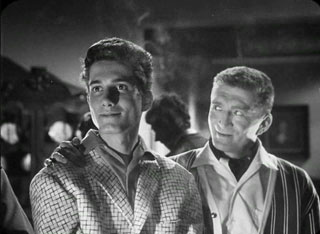