The women’s prison drama has been so popular that it has become a subgenre. Dozens of films since the 1930s have thrown a bunch of unruly women into a cell to watch them howl and scratch each other’s eyes. Most of these films have been exploitative, voyeurististic, and totally unconcerned with the realities of life in prison. And most of them have been made to amuse and titilate straight men. There have been a handful of exceptions to this: the ITV series Bad Girls, the Ida Lupino-starring Women’s Prison, or — in the ‘incarceration of lunatic ladies’ sub-group—, the Oscar winning Girl, Interrupted, and Sarah Watters’ Affinity. All of these treated with respect the perennial lesbian fantasy of a world made exclusively of strong women living in close quarters.

All of them, while thriving on melodramatic registers, were interested in showing some psychological depth. None of them, however, raised above the bar of the ‘interesting but not outstanding’ film. And so, we come to John Cromwell’s Caged, of 1950, which distinguishes itself from all its cell-mates by being utterly and absolutely brilliant.
Eleanor Parker plays a young innocent who has drifted to the wrong side of the law. In prison, she will learn that the penal system is not interested in reforming anyone, but only in erasing every single trace of humanity from the inmates. Inside these walls, cruelty and coldness are the only choices on the menu. And lesbianism is the only currency, making all the difference between helplessness and safety, if you are lucky enough to become the ‘favourite’ of one of the lady-gangster-pimps who runs this joint.

Real-life-lesbian Agnes Moorhead (the camp Endora in Bewitched) plays the somewhat human prison director, and the remarkable Hope Emerson plays the sadistic warden, and they are both wonderful in this film. But at the end of the day, Caged is Eleanor Parker, because the core of the movie is the transformation of the gentle and shy Mary Ellen into an amoral version of the flesh-and-bone machine that was Sarah Connor in Terminator-2. Parker’s portrayal of the character is stunning, a masterpiece of dramatic acting. Director John Cromwell got in trouble with Hollywood censorship again and again, but here, he managed to give us a moving, earnest, and hard-hitting mainstream film about the ongoing disgrace of our ‘democratic’ penal system, which does nothing but put people away and destroy them.

About EVIL SEASON “MAD, BAD, AND DANGEROUS TO KNOW”
screenings @ 3:30 pm
doors open @ 3 pm
come early and join us in the foyer for free tea & coffee 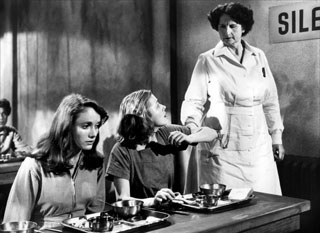