Photo by John Minihan
Mouth on Fire Theatre Company, founded in 2010, will stage ‘Teacht is Imeacht’, the Irish-language translation of Beckett’s short play ‘Come and Go’.
The play has been translated by acclaimed author, poet and translator Gabriel Rosenstock.
It will be performed as part of an ensemble production entitled ‘Before Vanishing…’, which will feature four of Beckett’s short plays: ‘Ohio Impromptu’, ‘Footfalls’, ‘That Time’ and ‘Come and Go’.
Audiences at ‘Before Vanishing…’ will see ‘Come and Go’ first in its original English-language version and then as ‘Teacht is Imeacht’, in the Irish language. 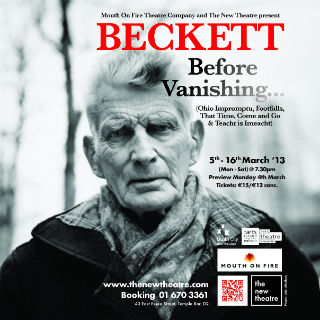