Young Man With A Horn

A musical Noir on compromise versus tough choices
Lauren Bacall was famous for her smokey voice, intense gaze, glamurous appearance, and for her portraits of sexually assertive and sharply intelligent women. In Young Man with a Horn, she plays a sexually ambiguous woman who tries to live the lie of a proper heterosexual marriage, but has to struggle with her ‘wicked’ side.

Her story appears to be a subplot in a film about the life of a trumpet player. A dazzling Kirk Douglas plays the title role, based on the life of Bix Beiderbecke, the white boy who fell in love with the emerging black-American jazz scene in the 1920s, and who eventually became a virtuoso of ‘the horn’. But the film is not just a biopic, or an opportunity to listen to some absolutely gorgeous music.
Young Man with a Horn is actually a meditation on the pull to conform and fit in in society, in terms of creativity, and in terms of sexuality. Rick (Douglas) has to struggle between, on the one hand, his passion for an underground music style and a downtrodden culture, and on the other hand, the mainstream music circuit with its formulaic commercial showbands. This last is represented with suitable ‘straightness’ by the perfectly cast wholesome-looking Doris Day (herself an underrated but wonderful singer).

The original novel did not have openly queer characters, and its author, the great Dorothy Baker, was not impressed by the liberties taken by the film. However, she had published a groundbreaking lesbian novel in 1943, and she was reportedly lesbian, so the film seems a rare case of retrospective lesbianization of a book! Baker shouldn’t have complained; they did a wonderful job, expanding and deepening the theme of the original book. Young Man with a Horn is definitely a gay film, not because of a thrilling lesbian subplot, but because the subplot ultimately becomes the main story: look inside yourself — most of us live a life of compromise, but isn’t the prize just too high? 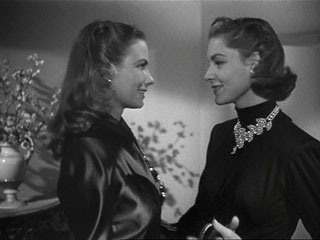