In this hilarious and sometimes unsettling send up of American style group therapy sessions, six people gather together in a locked room for Encounter Therapy that promises to probe their lives. The session does not go as planned and they get more than they bargained for when one of their number savagely exposes their real social and sexual secrets.

Directed by Bairbre Ní Chaoimh
Bairbre Ní Chaoimh has worked extensively as an actor on stage, screen radio and television. Since making her debut at The Abbey Theatre, she has performed with many companies including The Gate, Druid, Rough Magic, Calypso, Fishamble, Storytellers and The London Stage Co. As a theatre director she has presented plays in Ireland, England, Scotland, Germany, Kosovo, Macedonia, America, Canada and Australia. She was an Associate Artist at The Abbey Theatre for three years. Also, while Artistic Director of Calypso Productions she received the Irish Times Special Judges’ Award.

Directing credits include, Master Harold and the Boys, The Wonderful World of Dissocia and Operation Easter for Calypso, Act without Words, Play and Come and Go for the Gate, the multi award winning Catalpa for Donal O’Kelly, When The Wall Came Down and adaptations of several Oscar Wilde stories for Storytellers, a touring production of An Triail for Aisling Ghéar and Thou Shalt Not Kill for Smashing Times.

She performed in Laundry, which won the Irish Times Best Production Award 2011 for ANU and appeared in The Abbey Theatre’s acclaimed production of The Picture of Dorian Gray at the 2012 Dublin Theatre Festival. Bairbre’s previous work at The New Theatre includes Seven Jewish Children and The Diamond Lens and several productions with the graduating Theatre students from Inchicore College of Further Education, including Loveplay, One for Sorrow, Bad Sunday and The Stone at The New Theatre. 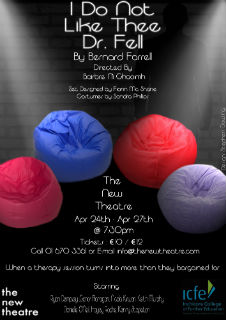