In the name Stephen Dedalus, he adopted in this, his early masterpiece, Joyce signalled his need to escape the nets he claimed Ireland would trap him in – religion and nationality. He would seek to fly “above these nets”. Unique among his contemporaries he laid claim for the artist’s freedom from such temporal concerns to “forge the uncreated conscience of his race”. Thus began his life long task of sketching the universal human condition he had observed around him in Dublin in the real lives of ordinary people.

In the course of A Portrait which covered the first decades of his life, we see him creating his own individual aesthetic, as opposed to the dictates of the Church. He is already aware of the beginnings of new European writers such as Ibsen, and leaves Ireland to live mostly in poverty, but at liberty to seek nourishment from other cultures. The novel eventually published in 1916, contains some of the most dramatic scenes in modern literature.

“At times unsettling, always entrancing”
“There are powerful performances from the entire ensemble, with special mention going to Patrick O’Donnell in particular for his rousing performance”
“The simplistic set and stunning lighting design also deserve a mention, effectively turning the intimate venue of The New Theatre a sort of playground for Joyce’s imagination to come to life before us.”
– Gillian Greer, Meg.ie
Read the full review here

“The New Theatre’s production … is Joycian style incarnate”
“Lauren Farrell’s role as Stephen is well suited… she embodies the curiousness and cerebral focus of Stephen.”
“It is restorative and most definitely alludes throughout to the simultaneous universality and localism at the heart of Joyce’s writing”
5/5
– Aoife Ryan, Entertainment.ie
Read the full review here. 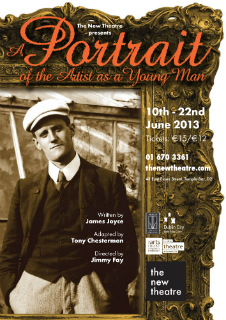