The world’s most average private detective, Jack Kairo, is back in his toughest case yet. Equipped with half his wits, his trusty .45, and a match book from a mysterious nightclub Jack has to solve the case, before it’s too late.

What is the mysterious and beautiful Manuka Honey, hiding?

Where is the mysterious hit man called “The Bondholder”?

What does Lomos Calientes, the mysterious latino sex machine, need from Jack?

Why is there such a flagrant over use of the word “mysterious”?
Because this is a mystery that only one man can solve.

The Friends of Jack Kairo: A one man show and
Jack Kairo and The Long Hard Kiss Goodbye: a one man show…with two men.

Directed by Vincent A. O’Reilly 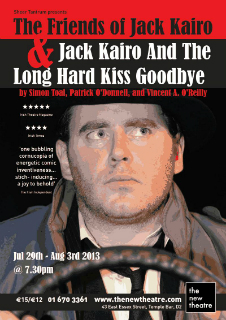 by Simon Toal, Patrick O'Donnell, and Vincent A. O'Reilly.