Jane and Harold live in their “idyllic” cottage on a cliff path overlooking Dublin Bay.
There are two women in Harold’s life, wife and daughter. He smugly believes he is a good father and husband. The two women think otherwise. Jane passes her days alone in the house she calls her “puffin’s nest”; he at long boozy lunches in town with colleagues.
His daughter struggles as an actress in London. She returns unexpectedly, bearing unhappy news for her parents.
Having listened briefly to her story, Harold departs for town, by car as usual.
Unknown to Jane, there was a third woman in his life, an American whom as young man he wooed but deserted. Now she reappears, to haunt him.
In this tale of dark humour and even darker revenge, the three women contemplate the damage he has done to their lives, and Harold is forced to confront the truth about himself.
When it is too late.

About Oliver McQuillan – author (right)
Oliver McQuillan is an actor and writer. Acting work has included stage, film and television (RTE and Channel 4). Writing for theatre includes The Ghost Room, an exploration of the fears and failures of Catholic clerics; adaptations of Wedekind’s Lulu plays and Ben Kiely’s novel Cards of the Gambler written with the author. His short play, Shakespeare & Schoenberg, was performed to favourable critical reviews in the Project in 2007.

About Peter Reid – director (left)
Peter has directed over fifty plays in the last 15 years. Recent work for AC Productions, of which he is cofounder, includes Irish Times Theatre awards nominated PINTER X4 in the Pearse Centre, and Shakespeare’s Twelfth Night in the Project. Other work includes sell-out productions of the Merry Wives of Windsor and Much Ado About Nothing. As specialist in classic theatre he has directed and toured with Beckett’s Happy Days, Endgame and Waiting for Godot, Pinter’s The Birthday Party, and Brian Friel’s Faith Healer.

As a freelance director he directed The Trial of Dr Luther, written and performed by Oliver McQuillan, for Corpus Productions in 2011. In November next he will direct Oliver’s play Have You Seen Mr Smith, also in The New Theatre. 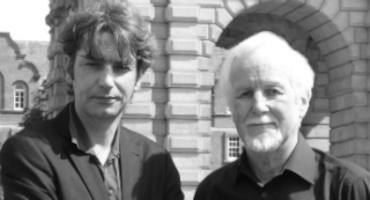