(approx. 1 hr)
Would you hire your ex-boyfriend to paint your family home, with help from a convicted arsonist? Neither would Abbie but her sister Sorcha does. Meddling at the best of times, Sorcha is sent into overdrive at the prospect of saying goodbye to her emigrating sister. So why does she do it? To rekindle the romance? To give Eddie some work? Or just to cause trouble?
Director: Shane Burke
Cast:
Teri Fitzgerald
Conall Keating
Conor Scott
Amilia Clarke Stewart
About the author:
Shane Burke’s previous writing for the stage include Flipside (2011, The Pearse Centre), The Horse Trading Diaries (2012, The New Theatre) and Forget Me Not (2013, London, Camden Fringe Festival). He lives in Dublin.

It Ends with Magic

(approx. 50mins)
On a cold day in a Dublin suburb, Joe waits for the magician his parents promised for his birthday, but his impatience is not because he wants his magic show but that a dragon has moved into his bedroom and of course as every child knows only a magician can stop it, the only problem is, this magician has got some demons of his own.
It Ends With Magic, a show about life, death and of course, balloon animals.
Director: Stuart Roche
Cast:
Sinead O Brien
Finbarr Doyle
Sarah Flanagan (stage directions/actor)
About the author:
Simon Toal has been a professional actor for the last twenty years during which time he has performed in over 30 plays, from classical to contemporary and devised. He was co- creator of the award winning “Fallen Angels” Cabaret with whom he worked as a key writer and performer, from which he moved on to create his internationally critically acclaimed solo show “The friends OF Jack Kairo” which he performed in Edinburgh, Romania, Prague and has toured nationally. He was shortlisted for The List magazines Writers Guild Of Great Britain “Best New Writers Award” and nominated “Herald Angel, Best Actor Award,” at the Edinburgh Festival. He was also nominated for the “Best Male Performer Award,” at the Dublin Fringe in 2005. Since then he has acted in many different roles including dramaturge for Polish Theatre Irelands fringe show “Cheeslaugh Meewash,” and was co- writer and actor for the acclaimed “A Very Strange (Kind Of) Wedding,” with the Abbey Theatres Pathways Project. He is currently artistic director of Sheer Tantrum and holds an MA (Hon’s) in Drama and Performance from UCD.

(approx. 1 hour)
Midnight to dawn. The witching hour until the hour of the wolf. These are the hours where all of the mild mannered and well behaved people are asleep. Yet not everyone sleeps. These hours can be the most important, the most memorable and the most terrifying in a person’s life. The Dead Hours explores what really happens late at night, when the ghosts and ghouls (and all night party people) come out to play. A play about secret late night romances, about things that go bump (and grind) in the night and about how a city is just as alive in the dead of night as it is during the day.
Director: Lloyd Collins
Cast:
Gavin Duffy
Cormac Fitzgerald
Leo Clements
Ciaran McStay,
Laura McDowall
Anni Frankie
Annie Cleary
Jenny Leech
Eoin Rogers
Will Shannon
About the author:
Lloyd Collins is a young(ish) writer based in Dublin. He teaches and runs Uproar! Youth Theatre in St. Kilian’s German School in South Dublin. He has written three pieces that have been performed around Europe at the InterTWINed Youth Theatre festival. He’s also a founding member of the festival, which brings eight groups from all over Europe together to workshop and showcase their pieces.

Kitty in the Lane

(approx. 95mins)
Kitty sits alone in her kitchen. Her father is dying in the room next door. Kitty wishes he would just hurry up. Kitty wishes her boyfriend, late to collect her for an evening together, would hurry up too. Lonely, depressed, anxious and still mourning the loss of her late brother, Kitty’s evening is about to devastate or thrill.
Director: Aine M.K Ryan
Cast: Aine M.K Ryan
About the author:
Áine Ryan is from Co. Tipperary. She graduated with a BA in Theatre and Performance from Goldsmiths, University of London in June 2013. Her ten-minute monologue entitled Glimpses was produced by The Goats Theatre Company at Ye Olde Rose and Crown Theatre, London in September 2012. She also completed Eastenders: E20 Writers School with BBC between January and July of 2012. Kitty in the Lane is her debut play.
Performing Credits include Rachel in Five Pillars (dir. Jon Rosling) with Eye Films in Yorkshire, 2013 and Danuta in Heavy Duty (dir. Rhys Hayward) in Somerset, 2012. She has played leading roles in short films for companies such as Milkwood, Film London and the NFTS.

Contains adult themes. May not be suitable for children

One of the key aims of The New Theatre is to provide a platform for New Writing, with a particular interest in new Irish writers.
The New Theatre presents a playreading by an emerging or established writer on the first Saturday of each month.
Entry: FREE, but a suggested donation of €2 would be welcomed.

New Writing Authors: Please send in an outline first to thenewtheatre1997@gmail.com and based on that, we will return your email with a possible request for more information. Please send for attention of: Nora/Anthony. 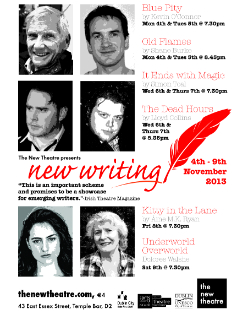