Carter has found the perfect location to shoot his zombie movie set during the famine – a country house on an island off the coast of Mayo.The only catch is he has it for just 3 days.
So when his lead actor drops out the day before shooting starts, Carter is faced with a dilemma – pull the plug on his dream project or cast the mysterious Vardell, an actor of incendiary talent but with a dark past that Carter knows precious little about. As events unfold on the set, Carter soon suspects that he may have made a grave mistake…

“His eyes take me in, no they drag me in by the scruff, with the promise of something different. Something vivid. Something dangerous. Deane pledged, Deane vindicated, Vardell a god.”
Visceral, blackly comic and genuinely scary, “Revenant” stars Simon Toal (Nominee-Herald Angel Award, Best Actor Edinburgh Fringe) who was most recently seen at the New Theatre in “Jack Kairo and the long hard kiss goodbye” 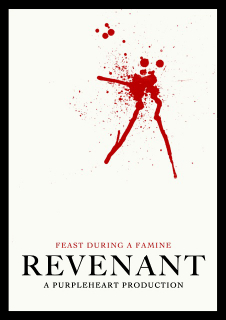 The New Theatre presents in association with PurpleHeart