Workers’ struggles in Greece and Ireland

Home  /  Film   /   Workers’ struggles in Greece and Ireland
Back to events

Into the Fire: The Hidden Victims of Austerity in Greece (2013)

3pm
In times of severe austerity things look bleak for Greek people, but they’re far worse for those who have recently arrived. Without housing, legal papers or support, migrants in Greece are faced with increasing and often violent racism at the hands of the growing neo-Nazi Golden Dawn party and the police.
Shot and edited with sensitivity and compassion, it doesn’t pull its punches and makes for harrowing viewing in parts. This film gives incredible insights into the reality faced by people who simply want to lead peaceful, normal lives, and how they are organising to protect themselves.
Directed by Guy Smallman and Kate Mara.
Presented in association with Anti-Fascist Action Ireland

4pm
A film reconstruction of the Askwith Inquiry which took place during the 1913 Lockout. This Inquiry was set up by the British Government, supposedly to investigate the origins of the dispute, to resolve the grievances of workers and employers, and to end the strike. William Martin Murphy represents the employers’ side with Jim Larkin and James Connolly speaking for the workers.
The film follows the course of negotiations and includes Connolly’s famous ‘Statement of the Workers’ Case. Askwith reported in his findings that the workers had significant grievances but the employers rejected the inquiry’s recommendations.
Written by Turlough Kelly. Directed by Brian Gray.
Presented in association with Dublin Community Television. 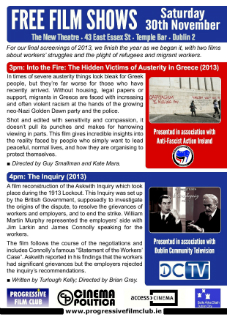