Sharon’s dead. She said she was raped and no one believed her. Then she killed herself, and they believed that just fine. Now her sister Nadine and her best friend Maria want revenge. That’s when they contact Joanna.

Joanna is an urban legend; a brutal vigilante who abducts, tortures and kills rapists. She arrives in town and soon Maria and Nadine are waiting in an abandoned ghost estate while Joanna very, very, very slowly murders the man who caused Sharon’s death. But when Joanna starts uncovering more details as to what actually happened to Sharon. Maria and Nadine may come to regret the force they’ve unleashed.

Because Joanna is not justice. She is not law. She is not society.
She is the thing that comes after.

About WireBird Productions
WireBird was founded in 2013. We aim to present new, original, challenging dramatic works that have something to say about this world we live in, while never forgetting that our first job is to tell a damn good story. Joanna is our first production.

Clodagh Mooney Duggan – “Maria”
Clodagh is a recent graduate of the Gaiety School of Acting. Her theatre credits include the devised play Gaslights in Theatre Upstairs with the newly formed theatre company The Cup, Love Song in Smock Alley with Catch The Pigeon Company and she is currently playing Juliet in Romeo And Juliet and Lady Macduff and The Second Witch in Macbeth as part of Shakespeare for Schools program which begin in Smock Alley in March.

Caroline Harvey – “Nadine”
Caroline studied in Bull Alley Theatre Training Company and The Factory’s Screen Acting Programme. Theatre credits include the role of Marolyn in the original play Bound by No Tears Productions. She recently appeared in the music video for top Irish band Dirty Epics new song Those Pretty Things which won the Hotpress/HTC Take one Competition, and the short film ‘Lost in Pilsen’ by Jump Films in which she played the part of Jenny.

Paddy-Jo Malpas – “Joanna”
Paddy-Jo’s theatre credits include Anna in The Yalta Game by Brian Friel (C.A.S Productions), Alice in Alice in Wonderland (Upstart Theatre), Voice 2 and Gila in a Pinter double bill of Family Voices and One for the Road (Fast Intent Theatre) and most recently she played the role of Layla in My One and Only in Theatre Upstairs.

Neil K Sharpson – Writer
Neil is a playwright from Dublin. He was selected for the pilot New Playwrights Programme in the Abbey Theatre and his short play Maeve in Lamplight was performed as part of the Abbey’s Into the Woods series of play readings. He was shortlisted for the Maguire International Playwriting Award for his play, The Big Fellahs, and another play The Anti-Apologists was selected as part of the Last Frontier Theatre Conference in Alaska. He is also the founder of the popular movie review blog Unshaved Mouse and is a writer on Irish superhero comic League of Volunteers.

Aoife O’Donoghue – Director
Aoife is an alumnus of UCD Dramsoc, and directed several productions with them, including Neil K Sharpson’s Fionn MacCumhaill at the International Student Drama Festival in St Petersburg 2007, where it received a special commendation for Contemporary Interpretation of a Myth. With CYEBO Theatre she directed Rosencratnz and Guildenstern are
Dead (Teacher’s Club) and Neil K Sharpson’s The Search for the Real Jimmy Gorman (Player’s Theatre). 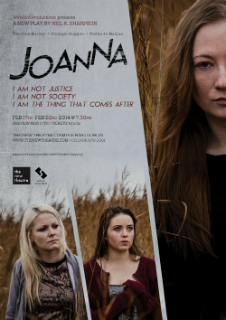 This show contains references to violence, torture, and rape.