Doubt: A Parable
Set in The Bronx, 1964. A charismatic, and forward thinking priest is accused of having an inappropriate relationship with a troubled young student. The principle, a conservative and strict nun, begins a crusade against the priest. A fierce and explosive battle of wits ensues, exposing a world of immorality, patriarchy, scandal and doubt.
Directed by Jack Lynskey
Starring: Oisin Mc Cartan, Jennifer O’Dwyer, Aisling Crosson & Emma Mufundi

Low Level Panic
In a world where women are becoming more and more sexually objectified, three young women reflect on their position in society from the relative comfort of their bathroom. Three different women, with different outlooks and ways of dealing with their problems.
Directed by Danielle Traynor and Kieran Genovese
Starring: Katie Mc Dougall, Joanne Whelan & Carisa Sheridan

After dying, Sam and John find themselves in the waiting room that is Purgatory with only one way out. A doorway guarded by Peter. But what’s waiting for them on the other side?
Directed by Pierce McDonough
Starring: Nabil Ghnewa, Eoin Conlan, Sarah Quinn, Jack O’ Higgins, Gerard Higgins.

About DIT Drama Society
Dublin Institute of Technology’s Drama society will be putting on several exciting productions this year. Drama society brings a mixture of fun and excitement to the stage as well as showcasing all the society’s talents and abilities. This year the society is looking to put on a variety of unique and thrilling shows which will display the many talented actors that make up the society. In previous year, the society has performed a huge and varied number of productions such as Avenue Q, A Skull in Connemara and Dark House, as well as many original plays written by members of the Drama Society. We have productions to please and captivate those of all ages and walks of life so this year we hope that everyone will enjoy watching our plays as much as we enjoy performing them. 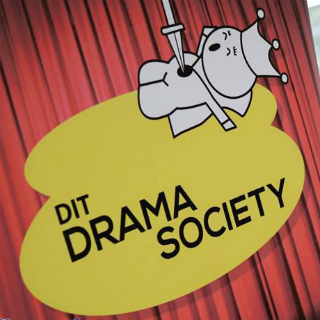