Home  /  Play Reading   /   The Sublime Hereafter
Back to events

If the world was ending tonight, what would you do and where would you go? Jan and Than decide to do as they do most idle days and take refuge in their local pub except that the usual prattle that passes for conversation isn’t good enough for Than this day. He wants to puncture through the bullshit and talk about the why‘s and how’s of what is going on. Jan sees no point in this and dismisses him, trying to battle against this break from their seemingly old routine. Over the course of this fateful evening, new aspects of their friendship are explored, secrets are revealed, and the very reason for their existence may have been discovered but has it all come too late…

About the Author
Eoin Sheridan is a secondary school teacher of Classical Studies and Irish, currently teaching in Greenhills Secondary School, Dublin 15. In the past 2 years he has taken both the Fishamble and the Big Smoke Factory playwriting courses. Both of which he found very different but also very useful and fun. Eoin has also had a short story published before but this is the first play he has written and presented. 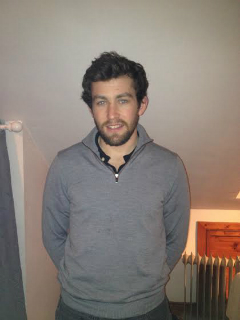