The Assassination of Brian Boru

Home  /  Theatre   /   The Assassination of Brian Boru
Back to events

Two brothers of conflicting ideals sail to Ireland to defeat the High King Brian Boru. Over the course of the journey they part enemies, and meet again on opposite sides of the battlefield.
Brodir and Ospak are respected warriors, two brothers of vastly different temperament who have fought side by side in many battles throughout their lives.

On their journey to Ireland they are plagued by omens, iron beaked ravens and showers of spears and blood. Cracks begin to scar their accord. The omens tell Ospak that they find themselves on the wrong side, but Brodir is dogged in his hunger for victory and power. The voyage breaks them as brothers and allies. Ospak deserts his brother to convert to Christianity and fight on the side of the good King.

The brothers meet on the battlefield after Boru is killed, and in the bloodthirsty mess of the fight even the clarity of death is shaken. 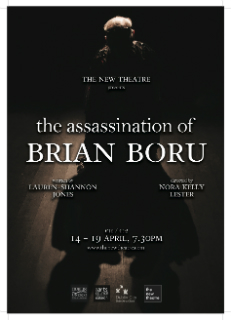