In association with Bealtaine Festival: celebrating creativity as we age.

Joe is in total control of his world. It’s a pity that it exists only in 1/35 scale and is made of plastic. Meanwhile back in the real world there’s a competition coming up and Joe just wants to be left alone to build his models and win best in show. Unemployment has finally given him the time to enjoy his hobby of sticking bits of plastic together, but unfortunately his wife, his kids, the bank manager, his nemesis Hermann (whose real name is Brian), the checkout girl in Tesco and Angela Merkel have other ideas. 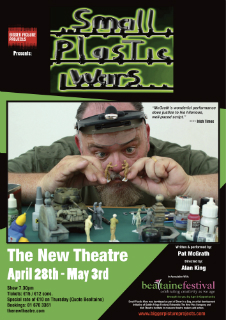