We end the season the way we started, with individual stories placed within a larger background. In this film, two schoolboys fall in love, and they have to teach their classmates and their teachers about their right to be together.

From 1968 through to the end of the 1970s, there were a number of fronts where people sought radical change, and each single struggle became part of a general push to change ‘the system’. The student riots in Paris had a ripple effect on philosophy, art, literature, housing, clothing…

Similarly, the demand for lesbian and gay rights was ultimately about everyone’s right to live their lives any way they wanted. Education was a primary target for the rebels, who denounced schooling as a way of perpetuating authoritarian policies, but who also saw its potential to open people’s minds. In this lovely, fun, uplifting, and earnest movie, our schoolboys come up with the ultimate defiance: an unauthorised presentation at an official public event in the school.

Their guerrilla strategy involves a film they’ve made. Naturally. Naturally, because many sexually explicit, morally loose, politically provocative, crazily plotted, strangely shot, weirdly edited, daringly conceived, madly entertaining, sexy as hell, fearless, profound, hilarious, and outrageous LGBTQ films of the 1970s, were not primarily made to express, to share, to shock, or to entertain… they were made to educate. 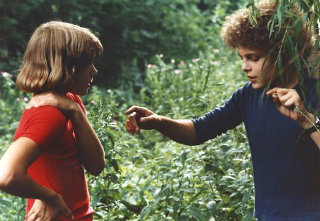