A casual encounter or an obvious set up? Abbie’s sister decides to get their home painted but fails to mention who she has in mind for the job. Enter Eddie – Abbie’s ex – a man with more baggage than BusÁras and his impulsive young colleague.
Is this is a simple girl-meets-ex-boy, or are there deeper motives at play?

The New Theatre is delighted to welcome back Run Amok Theatre, whose previous production, The Horse Trading Diaries, received 4 star reviews when it premiered at the New Theatre in August 2012. You won’t want to miss this fast-paced and funny production.

About the Author
Shane’s previous writing for the stage includes Flipside (2011), The Horse Trading Diaries (2012) and Forget me Not which featured as part of the 2013 Camden Fringe Festival, London. See www.runamoktheatre.com for further details.

About the Director
Andrew has an MA in Directing for Theatre from UCD and is a co-founder of GLAD productions.
He was a directing intern for Fishamble’s The End of the Road.
Directing credits include his own plays: Kit & Mitch and Elizabeth Smith of Baltiboys; as well as Show Boat by Jerome Kern and Oscar Hammerstein II; Tankardstown by Christine Longford; Flipside by Shane Burke; and A Date with Mercy by Jane Mulcahy.
He has also written and acted in different projects, most recently ‘Angela, She Wrote: Lansbury the Musical’ and ‘The (Acute) Angina Monologues’. 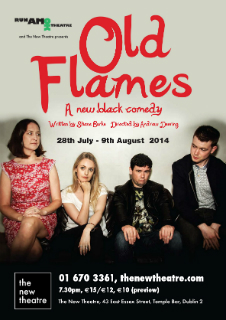 Run Amok Theatre in association with The New Theatre