In the world premiere of this black comedy, a young documentary film maker, forced to take a part time job in a Dublin research company, soon discovers that the business has come up with a unique and dangerous solution to help ride out the recession.
Funny, dark and unsettling, “Tracer” is a timely reminder of how far some people are willing to go in order to survive.
From the team that brought you last year’s Stewart Parker nominated play “Revenant.”

About the author:
Stewart Roche is the Artistic Director of PurpleHeart. His first original play “Revenant” had its world premiere at The New Theatre in November 2013. It was nominated for the 2014 Stewart Parker Award and is currently on tour. His latest play “Variance” has recently finished a two week run at Theatre Upstairs and was produced by Timador productions. 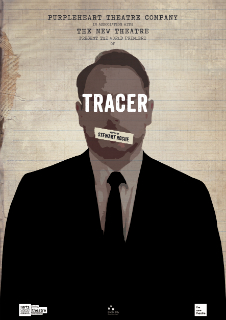 PurpleHeart Theatre Company in association with the New Theatre