Friendly Fire tells the story of Francis Ledwidge as a poet, lover and his internal conflict before he makes the decision to go to war. We learn about the two loves in his life – Shivvie and Ellie. His best friend Timmy and Lord Dunsany who funded him as a poet which he returned that gesture by joining dunsanys regiment to fight in the the first world war.
Gerard Humphreys’ play deals with his work as a union organiser, the conflict he faced at the outset of war, his return home and finally his last battle.

Strongly built, with striking brown eyes and a sensuous face, Ledwidge was a keen poet writing where ever he could – sometimes even on gates or fence posts. From the age of fourteen his works were published in his local newspaper, the Drogheda Independent reflecting his passion for the Boyne Valley.
While working as a road labourer he won the patronage of the writer,Lord Dunsany, after he wrote to him in 1912, enclosing copybooks of his early work. Dunsany, a man of letters already well known in Dublin and London literary and dramatic circles, and whose own start in publishing had been with a few poems, promoted him in Dublin and introduced him to W.B. Yeats with whom he became acquainted.

Dunsany supported Ledwidge with money and literary advice for some years, providing him with access to and a workspace in Dunsany Castle’s Library where he met the Irish writer Katharine Tynan, corresponding with her regularly. Dunsany later prepared his first collection of poetry Songs of the Fields, which successfully appealed to the expectations of the Irish Literary Revival and its social taste for rural poetry. 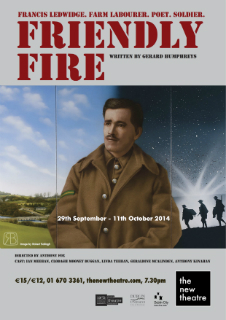