According To His Need

Nick, a lifelong bachelor attempts to pick up girls by joining the Socialist Party. Here his feigned persona as a tree-hugging, injustice-hating ally of the working class lands him in a relationship with his polar opposite, Cass. Things spiral into absurdity as he uses politics for romantic ends, while she uses romance for political ends.

Directed by Nora Kelly Lester
Direct from the Edinburgh Fringe Festival, where it received huge critical praise.
Meticulously crafted dialogue, bizarre characters, and a twisting, ironic plotline are the key features of the show which plays The New Theatre as its only Dublin engagement

About the company
Reds Theatre Company strives to promote new writing with a political or experimental edge. 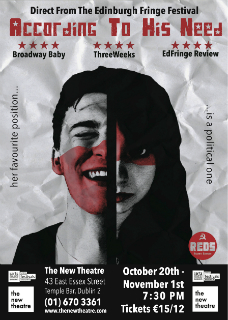