Two performers have a difficult story to tell. They come on stage and launch themselves into an hour long attempt to put into words the utterly unspeakable.
Delivered in English and Bulgarian, with pounding gypsy-inspired music, this beautiful performance fills an empty space with two performers, hundreds of fresh flowers and a storm of emotion. A performance piece that packs a punch – transforming your very sense of what it is to be a mother, a father, a child. And you’ll leave more fully alive than ever.

Performance company Two Destination Language have worked for the first time with acclaimed choreographer Charlotte Vincent (Vincent Dance Theatre) as their dramaturg on this work.
Near Gone is the winner of a Total Theatre Award for Innovation, Experimentation and Playing with Form (2014) and the Pulse Fringe Suitcase Prize (2013)
Near Gone is a Colchester Arts Centre commission, supported by Arts Council England and The Point, Eastleigh.
Two Destination Language is the collaborative performance practice of Katherina Radeva and Alister Lownie.

Two Destination Language’s Near Gone with audience feedback from Alister Lownie on Vimeo. 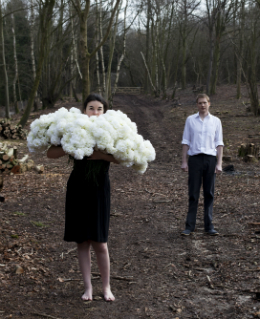