The Candidate
by Claire Millane

Synopsis
Patrick Fitzmaurice Brown, TD is running for Europe. His wife Angela is his PR guru. She’s the real brains behind the campaign and will go to any length to ensure her husband is elected. Together with Spud and Pothole, two unemployed hip hop artists with a message, an angry community centre manager, a prostitute with a double life and a journalist The Candidate is a comedy about love, greed, revenge and ambition and how far a politician will go to win votes.
About the author
Claire trained as an actor at the Focus Theatre and the Gaiety School of Acting, graduating in 2012. During her time training in the Gaiety she wrote a farce entitled A Country Affair and then inspired by a workshop in commedia dell’arte she devised and performed a 10 minute Italian Opera as part of Manifesto class. This encouraged her to further explore comedy writing and acting. She’s also a big fan of classic comedians such as Spike Milligan and Dave Allen. Last year Claire took part in the 24 hour play challenge at the Galway Theatre Festival writing a comedy entitled The Reunion, which was well received. The Candidate is her second full length play.
Cast:
Simon Toal
Claire Millane
Ian Mcevoy
Manus Halligan
Sheila Moylette
Gerard Dempsey
Clodagh Downing
Eoin Barton
Directed by Stewart Roche

Synopsis
“Smoking Section” is an original play about life inside a secure psychiatric unit. The story touches on the lives of several different inpatients from different backgrounds who are “trapped” inside the psychiatric unit, but to pass the time they smoke, drink coffee and devise a malicious game.
About the author
Derek is a Graduate of UCD having studied English and Psychology (B.A. Hons). He has written, produced and directed thirteen professional shows within the last five years, including, critically acclaimed “Bound”, “Angel”, “A Nice Bed to Die In”, and most recently “Queens of Pimlico” all of which played to sell out audiences throughout some of Dublin’s most popular theatres. His plays “My Second Self” and “Two Sides of a Coin” were selected to be a part of the 2013 and 2014 International Dublin Gay Theatre Festival. Derek has also had short pieces staged in New York City as part of The Break Away Project’s “Creating Connectivity” ; been selected for The New Theatre’s New Writing Week in 2013 ; partook in the recent “spcedLIMERICK” collaborative, and was part of Dublin Theatre Festivals “Play On” initiative in 2013. Upcoming projects include a (“back by popular demand”) third run of “Queens of Pimlico” and the premiere of “A Mother’s Love”, both of which will be staged in Civic Theatre, Tallaght in November and December ; “Lusmor” which was commissioned by The Break Away Project and will be staged this Halloween in The Crypt and touring in 2015, and “Smoking Section”, “Rumour” and Skin Deep”, all of which will go into full production in 2015.
In 2009 he founded the prodigious No Tears Productions theatre company who will shortly stage their 13th production with “A Mother’s Love”.
Cast:
Barry Roe
Aisling Saul
Thommas Kane Byrne
Debbie Hart
Siobhan Callaghan
Gerard Jordan
Directed by Derek Masterson

The Easy Way Out
by Liam Murray

Synopsis
The Easy Way Out tells the story of two brothers leading very different lives during Ireland’s recent turbulent past.
Gerry, the older of the two, still lives with their Mother and is content to draw his social welfare and spend his days drinking beer in front of the television. A new online girlfriend has made him question his life and he begins to dream of something more.
Dennis has been to college, got a great job and travelled the world. A personal tragedy sends him into a tail spin and after many years away he returns to the family home to pick up the pieces. He finds solace in drawing and secretly hopes it could be his ticket out.
This forced, unhappy, union comes to a head through the course of a summer weekend in Dublin.
About the author
Liam has a journalism degree from DCU and has recently began a Masters in Creative Writing in UCD. He has completed a playwriting course with Fishamble and also took part in the Play On series with Dublin Theatre Festival. He is 29 and comes from Portmarnock in Dublin.
Cast:
Aonghus Og McAnally
Ian Lloyd Anderson
Directed by Karl Shiels

Down In History
by Jack Harte

Synopsis
For 500 years that we know of, from the 12th to the 17th Century, in a remote corner of Co Sligo, a dynasty of hereditary historians, the MacFirbis’s, compiled books such as the Yellow Book of Lecan and the Great Book of Lecan that recorded the history of Ireland. Unknown to the public, the descendants of this dynasty have continued the project to the present day. But the secret has now filtered out, and the PA of a business tycoon is dispatched to the home of Charlie McFirbis to ensure that he, the tycoon, is mentioned in the Great Book. A man also has arrived with his own insight and proposal for the revision of history as we know it. How will they be received by the legendary historian?
About the author
Born in Killeenduff, Co Sligo, Jack Harte has lived and worked in Dublin. He has many books to his name, translated into many languages, including two novels and three collections of short stories, as well as poetry, text books, and an art book. His novel, In the wake of the Bagger, was described as ‘one of the great books about Ireland’ (Irish Independent) and was selected as one of the 101 Irish Books you Must Read’ (Des Kenny) in the handbook of that title. He has recently turned his hand to drama. Harte founded the Irish Writers’ Union and the Irish Writers’ Centre. Further info on www.jackharte.com
Cast:
Gerard Lee
Lesley Conroy
Directed by Ann Russell

Synopsis
Fury is a series of monologues by women who have killed or taken life. .All of the characters are real historical figures who have committed the acts that they describe or allude to. Each of these very different stories is portrayed from the main protagonist’s point of view. Each murder is distinct in character and motivation and all of the voices are different, ranging in tone from comic to sinister and ranging in age from pensioner to child. In the re telling of events, characters seek to justify, explain or understand their actions. This play explores myths about women’s non-violent nature, the taboo of women who abuse and questions the appropriateness of judging murder by a child in the standard criminal court system.
About the author
Lorraine Mc Colgan is a Counselling Psychologist and Clinical Supervisor who has worked extensively with a population of clients from within the criminal justice system and with many survivors of abuse. She is also a published poet and has been featured by The Stinging Fly and Poetry Ireland as part of their “Emerging Poets” series. She is a singer/songwriter who released her debut album, “Riches”, with her band The Winters last May which received strong critical reviews from Hot Press, The Irish Times and RTE Online. She performs regularly in music venues in Dublin.
Cast:
Lorraine Mc Colgan
Linda Teehan
Margarita Grillis
Amy O Donohue
Directed by Lorraine Mc Colgan

Rest In Peace
by Hugh Murphy

Synopsis
‘Rest in Peace’ is a serious portrayal of a woman dying from cancer, who finally gets the courage to stand up to her evil manipulating sister, Heather, and voice the observations which she would never have dared to utter.
About the author
Hugh is the writer, Director and Producer of the recently staged play, ‘Daddy’, by The Independent Theatre Company, which Hugh founded. This play is about the abuse of two adult sisters – their mother – and their subsequent attempts to have normal relationships with men. Daddy – also received two rehearsed readings – one by Attic Studio and the other from Tinderbox – some years ago. Dublin City Council Arts Director, Ray Yeates, upon receiving a glowing report on ‘Daddy’ awarded Hugh four weeks free rehearsal space in the Lab, DCC’s Dublin HQ.
This greatly facilitated the staging of the play, and which in turn will lead to the staging of Hugh’s other plays.
Hugh has written several other plays including Justice, which toured NI and to the Tron Theatre, Glasgow. It was also in the Dublin and Belfast Theatre Festivals.
When The London Irish Theatre Company and its Director, John Dunne were forced to cancel Hugh’s Belfast Docks play, The Judas Goat – because of Asbestos in the venue – the disappointment caused Hugh to found The Independent Theatre Company. It is ironic as Asbestos, features in this play.
Cast:
Catherine Conaty
Elisabeth Anne Smiddly:
Noelle Brogan:
Jill Russell:
Jemma Curran:
Hayden Mason:
Hilary Bowen-Walsh:
Meabh Carron:
Directed by Hugh Murphy 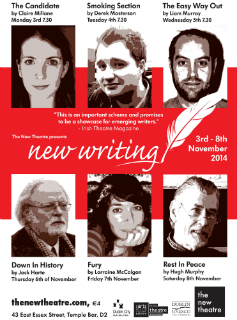