A new comedy about himself returning to earth to check on how things are going.
This absurd and irreverent new play is brought to you from the writer of ‘Men are from Stoneybatter, Women from Phibsboro’, ‘ Memoirs of a Dublin Bus Driver’& ‘The Dead Woman’s Son’

Written and Directed by Rua O’Donnachu
Produced by Andrea Cleary 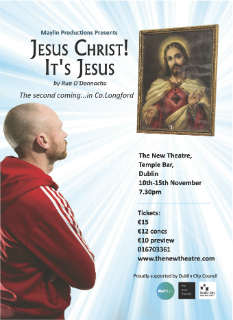