Fireplay follows two brothers and a friend, Michael, living impoverished lives on the bad side of town. Whole streets are being burnt down. The hospital has just closed. You’d think there was no way out.

A fire-obsessed man appears to Michael in the middle of the night: Michael wants to help his friends.
We watch the three men as they struggle with pasts and claustrophobia and each other. We watch brotherhood and friends, and we watch as they try to fix it. We watch a desperately human picture as they imagine their fate – and then try to outrun it.

About the process
The ensemble have trapped themselves in close quarters with each other for an entire month leading up to the performance. For twenty-four hours every day they occupy the same space and breathe the same air as each other, using their own human impulses to reimagine and respond to the text. As they explore the issues of the play in ways that take them far beyond the comfort of the rehearsal room, they have committed to live the play in order to create it.
See daily updates from the ensemble here

About the company
Cyclamen Productions Theatre is a new writing company interested in beautiful art and theatrical intensity. This means an emphasis on large-scale visuals, multi-disciplinary work, and writing that pulls no punches. With each new production we committ to bring innovative form and off-centre narratives to the stage. Each production is a new world.
See the group’s Facebook page 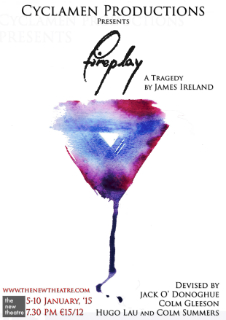