Irish Premiere of Vermillion Souls** (2004), presented by its director Masaki Iwana
*The panel discussion will reflect upon the body of butoh dance in relation to contemporary theory. Panelists are –
Katherine Waugh; film maker, curator and researcher of Antonin Artaud
Dr. Tina Kinsella; Lecturer in Visual Culture and Gender Studies at NCAD and Conceptual Director of Umbilical, a multimedia performance project that weaves butoh dance, visual images and original musical composition.
Trevor Knight; Director and performer in The Devil’s Spine Band.
**“Set in Tokyo in 1952, Vermilion Souls is a story of the dreams and realities encountered by a young boy who strays into a strange mansion while out chasing a flier dropped by an aircraft. Confined in the mansion are four adults suffering from an incurable disease which prevents them from being exposed to the sun”.

What is Butoh? Often thought of as a fidgeting trembling rolled back eyes, convulsions of white painted naked bodies it rather reveals itself as a bit more kaleidoscopic than that.

Butoh is a form of dance that emerged in Japan in the late 50s by founder Tatsumi Hijikata and developed further by Kazuo Ohno. It can be understood as a way of being, an artistic stance; a body method, a creative practice though attempting categorisation is limiting. What is certain about this live art-dance form is that it traverses a variety of artistic domains and historical eras.

Its form was strongly influenced by Dadaism, Expressionism, Surrealism, Antonin Artaud’s Theatre of Cruelty, Jean Genet, and in return, it influenced contemporary approaches to the performing body – Pina Bausch, performance art, and physical theatre, present in pop music as much as alternative experimental scene. In the past thirty years, Butoh became central as considered beneficial in the medical field, particularly within the real of mental health.

In the field of film-making, there has been a very interesting production. The early films of the 60s offer the possibility of experiencing physical intensity while the camera work allows for the multi-faceted dance form to come alive as a philosophical agent. Metamorphosis, repetitions, and the gestures of love and cruelty are protagonists.

The Butoh Film Festival will present a selection of video and film that gives a historical background and contemporary look at Butoh. We are delighted to present this selection which will broaden people’s understanding of a dance that has moved beyond the presentation dance as based in an aesthetic of beauty.

Curation and organisation:
Fergus Byrne is a member of the Visual Arts Centre based in Dublin, Ireland. His artistic practice is multidisciplinary and has been funded by The Arts Council of Ireland. He performs mostly solo work and occasionally ingroup projects. Early performance training was in Body Weather and Butoh study.
From 2010 – 12 he curated with Deirdre Murphy the annual performance event ‘Transversal’ at different locations in Dublin and in 2013 curated ‘Generation’ a day of  performance at The Dock, Carrick on Shannon.
www.fergusbyrne.ie

Ambra Gatto Bergamasco is based in Dublin. Currently director of Moving Bodies Festival -butoh dance and live art international festival; member of Dance Ireland and funded PhD fellow in the Department of Geography/Nirsa in Maynooth. Ambra’s involvement in butoh as a student dancer commenced in 1998 in Torino, Italy.

She has a background of physical theatre and theatre organisation due to a life time spent with her parents Ulla Alasjarvi, former actress of Euguenio Barba and Beppe Bergamasco director and visual artist originated within Arte Povera – lo Zoo. Informed by such cultural life, Ambra continued training with Peter Brook’s actors such as Mamadou Diume and Mallika Sarabhai.

In Torino, she has worked extensively with Ulla Alasjarvi and Beppe Bergamsco – theatre artists directors of Teatro Espace – as a festival curator and as assistant director bringing to the city renewed artists such as Mallika Sarabhai with whom she worked through collaborative choreography and toured India.
www.movingbodiesfestival.com
www.chokohma.com 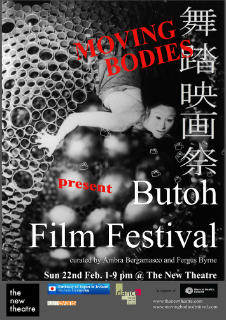