A Portrait of the Artist as a Young Man – TOUR

The New Theatre, Dublin presents the stage adaptation of James Joyce’s iconic novel ‘A Portrait of the Artist as a Young Man’.
A Portrait of the Artist (1916) unleashed the incredible power of Joyce’s innovation and unconventionality upon the literary world.
This stage adaptation makes use of the techniques that would make Joyce famous – and infamous – with his stream of consciousness narration.
Portrait of the Artist is Joyce’s reworking of the classic coming of age story, and it mirrors the author’s life up to age 20, when he left Dublin for Paris, challenging attitudes to family, homeland, and the Catholic Church.
Acclaimed Director, Jimmy Fay directs a cast of five actors in a production which received public and critical acclaim during its 2014 Irish and Paris Tours.
This production has been invited to perform at the prestigious Celtic Festival in The Clwyd Theatr Cymru, Mold, Wales from May 4th – 9th 2015 (nightly). The auditoriums of this theatre honour Anthony Hopkins and Emlyn Williams (writer) .
Please email – anthony.thenewtheatre@gmail.com or r_ryanval@eircom.net for information.

What the critics say…

– Irish Examiner
“At times unsettling, always entrancing”
“There are powerful performances from the entire ensemble, with special mention going to Patrick O’Donnell in particular for his rousing performance”
“The simplistic set and stunning lighting design also deserve a mention, effectively turning the intimate venue of The New Theatre a sort of playground for Joyce’s imagination to come to life before us.”
– Gillian Greer, Meg.ie
Read the full review here
“The direction is inventive and this is another fine display by Jimmy Fay” – No More Workhorse
Read the full review here
“The New Theatre’s production … is Joycian style incarnate”
“Lauren Farrell’s role as Stephen is well suited… she embodies the curiousness and cerebral focus of Stephen.”
“It is restorative and most definitely alludes throughout to the simultaneous universality and localism at the heart of Joyce’s writing”
5/5
– Aoife Ryan, Entertainment.ie
Read the full review here.

Once upon a time and a very good time it was there was a moocow coming down along the road and this moocow that was coming down along the road met a nicens little boy named baby tuckoo …
His father told him that story: his father looked at him through a glass: he had a hairy face.
He was baby tuckoo. The moocow came down the road where Betty Byrne lived: she sold lemon platt.
—James Joyce, Opening to A Portrait of the Artist as a Young Man

The early youth of Stephen Dedalus is recounted at a vocabulary level of Stephen’s own as he grows, in a voice not his own but sensitive to his feelings. The audience experiences Stephen’s fears and bewilderment as he comes to terms with the world in a series of disjointed episodes.
Stephen attends school at Jesuit-run, Clongowes College where the apprehensive, intellectually gifted boy suffers the ridicule of his classmates while he learns the schoolboy codes of behaviour. While he cannot grasp their significance, at a Christmas dinner he is witness to the social, political, and religious tensions in Ireland involving Charles Stewart Parnell that drives bitter wedges between members of his family, leaving Stephen with doubts over which social institutions he can place his faith in.

Back at Clongowes, word spreads that a number of older boys have been caught “smugging”; discipline is tightened, and the Jesuits increase use of Corporal Punishment.
Stephen is strapped when one of his instructors believes he has broken his glasses to avoid studying; prodded by his classmates, Stephen works up the courage to complain to the rector Father Conmee, who assures him there will be no such recurrence, leaving Stephen with a sense of triumph.
Stephen’s father’s debts see the family return to Dublin and Stephen realises he will likely not return to Clongowes.

Thanks to a scholarship obtained for him by Father Conmee, Stephen is able to attend Belvedere College, where he excels academically and becomes a class leader.
Stephen squanders a large cash prize from school, and begins to see prostitutes, as a distance grows between him and his drunken father.
As Stephen abandons himself to sensual pleasures, his class is taken on a religious retreat, where the boys sit through sermons; Stephen pays especial attention to those on pride, guilt, punishment, and the ‘Last Judgement’.

He feels the words directed at himself, and overwhelmed comes to desire forgiveness.
Overjoyed at his return to the Church, he devotes himself to acts of repentance, though they soon devolve to mere acts of routine with his thoughts elsewhere than on spiritual matters.
His devotion comes to the attention of the Jesuits, and they encourage him to consider entering the Jesuit priesthood.
Stephen takes time to consider, during which he has a crisis of faith, a conflict between his spiritual beliefs and his aesthetic ambitions.

Along Dollymount Strand he spots a girl wading, and has an epiphany in which he is overcome with the desire to find a way to express her beauty with his writing.
While a student at UCD, Stephen grows increasingly wary of the institutions around him—Church, school, politics, and family. In the midst of the disintegration of his family’s fortunes, his father berates him and his mother urges him to return to the Church.

An increasingly dry, humourless Stephen explains his alienation from the Church and the aesthetic theory he has developed to friends, who find they cannot accept Stephen’s positions.
Ireland, Stephen comes to realise, is too restricted to allow him to express himself fully as an artist—he will have to leave, he decides, and sets his mind on self-imposed exile, but not without declaring in his diary his ties to his homeland:

… I go to encounter for the millionth time the reality of experience and to forge in the smithy of my soul the uncreated conscience of my race. 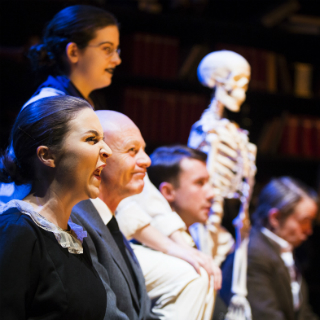