The play that counts Tom Waits and Lou Reed amongst its biggest fans, Orphans is the tale of two nearly feral brothers and the mysterious businessman they kidnap. Orphans has been described as being theatre for the senses and emotions.

It is a play full of humour and pathos, in which each of the characters is searching for human connection and their place in the world. The play premiered in 1983 at The Matrix Theatre Company in Los Angeles, where it received critical and commercial success and won the prestigious Drama-Logue Award.

Orphans is a co-production by two new production companies Alchemy 8 and Breaking Good.Alchemy 8 was established by Geraldine McAlinden and Elaine Reddy in 2014 with the aim of presenting work which reflects “the problems of the human heart in conflict with itself”. In doing so we hope to challenge, inspire and entertain the audience.

Breaking Good was established in 2014 by Jason Gilroy with the aim of producing work that authentically reflects our humanity and need for connectedness in the world. Lisa McNamee our executive producer is charged with ensuring that this strong cast and crew find their perfect audience. 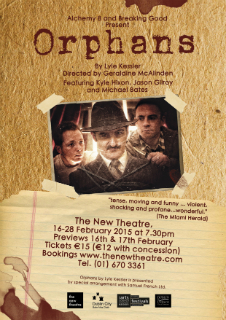 a coproduction between Alchemy 8 and Breaking Good