Paris Was A Woman

Greta Schiller (b. 1954) first made an impact with the documentary Before Stonewall (1984), a piece on the communal history of the LGBTQ community before the Gay Liberation Movement spread through the world triggered by the New York Stonewall riots in 1969. Schiller has directed several critically acclaimed documentaries since, all of them concerned with inequality, and some on queer issues, such as the film we have chosen for this season, Paris Was a Woman (1996).

One of the big rewards of lesbian historiography has been the rediscovery of the effervescence of lesbian art and culture in 1920s Paris. This period was truly a Lesbian Renaissance. We owe the groundwork to researcher Shari Benstock, who pieced together the lives of the multitude of outstanding lesbian and bisexual women artists drawn to the magnetic pole of Gai Paree. Women like Gertrude Stein, Natalie Barney, or the Irish Eileen Gray, who contributed to the sexual ebullience and artistic alchemy in the cauldron of the city. It is all retold in Paris Was a Woman. The script is by Andrea Weiss, not just a documentarist herself, as we have seen, but also the author of a wonderful book on lesbian representation in film, titled Vampires and Violets.

The lesbian feminist resurgence of the 1970s had a strong academic component – research seemed an urgent task, and it went hand in hand with the need to share the new maps of lesbian ancestry with other women. In the documentary Paris Was a Woman, with Greta Schiller at the helm, we have yet another case of a queer director who is pulling resources into an ambitious communal project. Which is perfectly fitting to a story about lavender networks or, (as Nazimova used to call them), ‘sewing circles’ of lesbian friendship and professional exchange. 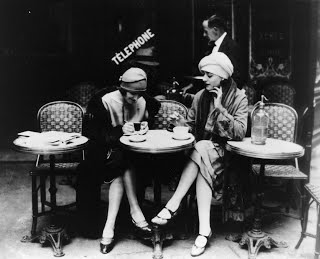