Home  /  Theatre   /   The Baltimore Waltz
Back to events

Anna and her beloved gay brother Carl, finally make a long planned trip to Europe in search of a cure for her recently diagnosed terminal illness. But when they get there, nothing is, as it seems. Why is Carl always in his pajamas? Who is the mysterious Third Man? And why do none of their holiday snaps look anything like the places they visit? The play serves as both a study of grief and loss, and a surreal farce reflecting the ambivalent response of the US government to the AIDs crisis.

This serious comedy was American playwright Vogel’s response to the death of her brother, who died in 1988 from complications due to AIDS. Whilst it has established itself as a modern American classic, it has not been performed in Ireland up until now. It won the Obie award for the best American play in 1993 and Vogel went onto win the Pulitzer Prize for a later work, How I Learned to Drive. This is the first professional production of this play in Ireland.

ABOUT BLUE HEART THEATRE
Brilliant theatre pieces exist all over the world and many face the threat of being buried in the avalanche of new work and already established canon. We are interested in finding the shared experience. We are interested in stories of people in challenging situations and we are interested in surprising ways of dealing with life’s offerings. The group has members from Ireland, the UK and the US.
Company website – www.bluehearttheatre.com
Facebook page

Ayrton O’Brien- Director
Ayrton started acting with Dublin’s LGBT community drama group Acting out in 2008. This started a love of theatre that encouraged him to pursue this passion professionally. He attended Bray Institute of Further Education’s performing arts course, earning FETAC and HND qualifications, before graduating with an Honours BA degree in Performing Arts in Swansea at University of Wales, Trinity Saint David. This latter qualification also gave Ayrton the opportunity to perform a role as Assistant Director to former Artistic Director of Sherman Cymru, Phil Clark in a production of Skellig.

Niamh Denyer- Actor
Niamh is from Sligo where she was a member of Sligo Youth Theatre and is a graduate of the Drama and Theatre studies programme at Trinity College Dublin. Her acting credits while at college include Gloria in The Penney Drop, Sister Aloysius in Doubt and Clown in Academy of Clowns. Niamh also studied at the University of California Berkeley on a study abroad programme; her acting credits while there include multiple roles in Attempts on her Life, A Deer in Champagne Problems and the lead role of Elizabeth in The Territory. Last summer she was a chorus member in Berkeley Independent Theatre Company’s production of Salome by Oscar Wilde.

Brian Higgins – Actor
Brian studied acting while living in Paris with the Bilingual Acting Workshop and with an international improvisation group called The Improfessionals. On his return to his hometown of Sligo in 2007, he co-founded Over The Rainbow, a community drama group with the intention of documenting LGBT lives in Ireland, and bring its history to light. He has continued to work in community drama since coming to Dublin in 2010 with Acting Out theatre group, where he has worked on several original plays, improvised works as well as playing the lead role of Oscar Wilde in Moises Kaufmann’s Gross Indecency and Jerry in Neil Labute’s Strange Fruit.

Mike Kunze – Actor
Mike began acting at a young age in various community programs in the Bay Area of California, and has enjoyed being on stage ever since. In high school he was in numerous productions, and then went on to earn a BA in Theatre and Performance Studies from the University of California, Berkeley. Recent credits include The Altruists with She Wolf Theatre Company, Life Machine at Faultline Theatre, Henchmen by James Nelson, as well as Attempts on Her Life and Deviations at UC Berkeley. This is his first appearance in a production in Ireland.

You can see the cast and director talking about the play here:

The Baltimore Waltz from Blue Heart Theatre on Vimeo. 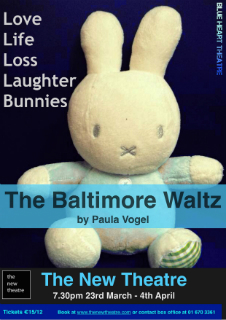 The play deals has adult themes and language and is probably suitable for anyone 14 and over.