In August 1971 eleven unarmed civilians were murdered by British paratropers in Ballymurphy, Belfast. This film documents this tragic event, offering testimony from families and friends as well as commentary from witnesses and leading politicians, including Gerry Adams and George Galloway. There are similarities with the Bloody Sunday atrocity, which occurred only months after this one. ■ Directed by Seán Murray. ■ Running time: 38 minutes.

Filmed by the independent film-maker David Martinez in 2003 during the early days of the US occupation of Iraq, this film portrays the hopes and fears of ordinary Iraqis as they are caught up in events over which they have little or no control. Shot on public transport and in the street, it is an antidote to the triumphalist accounts that we became used to hearing from the likes of CNN and Fox News. The quick descent into absolute chaos is well captured in this fly-on-the-wall film. 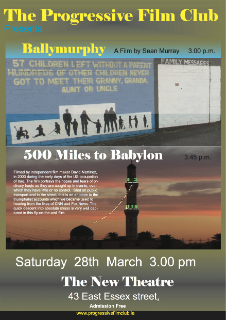