PTI’s new play, The Passengers offers the whisper of that voice that is lost in the movement of a crowd, moving beyond disillusionment to the most natural universal levels of the human condition and all its absurdities. It grafts the dreams that surround their self-exile and the things we wish for as we strive to find a home, identity and fleeting visions of comfort and belonging.

Inspired by true stories, The Passengers regales the journey of four citizens with four stories from four (or even more) different parts of the world, trying to forge their own lives within an ever-expanding modern existence wherein the compelling sense of self-loathing, guilt, hypocrisy and alienation pours forward with all but the strength of the collective human resilience and hope to stand against it.

Over the last number of years Polish Theatre Ireland (PTI) have split apart across the globe but against all odds we are still creating and working together. We are all moving every day, our past pulling at our feet and our responsibilities held on our shoulders weighing us down, whether during a chance reunion with an old friend in Dublin, a home revisited in Kraków, a hope for employment in London or New York city, a romantic exile to Rome or in any moment of an everyday action.

Anna Wolf is a Dublin-based theatre producer. She graduated from Adam Mickiewicz University, Poznań (Poland) in the Theatre and Drama Department. Anna is an Artistic Director and one of the founders of Polish Theatre Ireland (PTI). She directed PTI’s first play Scent of Chocolate (Focus Theatre, 2010) and PTI’s devised performance of Chesslaugh Mewash (The Lir Theatre, Absolut Fringe 2011). Anna also organized and produced stage readings of Polish and Lithuanian contemporary plays “Freedom LTD” (Submarine Bar, 2012). She also produced PTI’s Delta Phase (Theatre Upstairs, 2012), Foreign Bodies (Project Arts Centre, 2013) and Bubble Revolution (Theatre Upstairs, 2013). Most recenly she was a producer of On City Water Hill (Theatre Upstairs, 2014). Co-writting The Passengers is her debut in the world of playwriting.

Rory O’Sullivan is a new young playwright born in Dublin 1992. He began writing and reading his poetry in his early teens for the Servants Of Love self-supporting commune in Wicklow Town and for Wicklow writers group. O’Sullivan attributes his writing development in his youth to the teaching he received from poet Carol Boland and Cait Breathnach, and the master class in playwriting he took with Marina Carr (2012, Cúirt Drama Sessions). His critically acclaimed debut Dorset Street Toys was first performed by Fregoli Theatre Company for Galway Theatre Festival 2013. The Artistic Direction of Fregoli Theatre has impacted greatly on O’Sullivan’s work, as he credits the Company of bringing some of the most human and imaginative work to the Irish stage.

“His writing is a marriage of brutality and tenderness, this evocative, pulsing production echoes the lyricism of the play and spotlight’s the emergence of a promising playwright” -Irish Theatre Magazine on Dorset Street Toys.

The project is kindly funded by the Community Foundation for Ireland and the Office for Integration in Dublin City Council, and partnered by My Mind, a community based provider of accessible mental health services.
Play development has been supported by Fishamble: The New Play Company’s New Play Clinic scheme, and by The New Theatre. 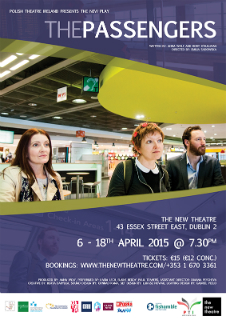