This play was a runaway hit when first produced in the 1940’s. The title had to be abbreviated for a while to “Johnnie”, after a Protestant Minister, from a pulpit somewhere in Ireland, deemed the inclusion of the word “britches” in the title rather risqué. A number of dramatic societies then started billing it as “Don Juan’s Pantaloons”, but it reverted back to “Johnnie’s Britches” on it’s next printing run.

Directed by Peter Reid
Anxious to be rid of their accident prone servant girl, Ned and Brigid are willing to allow her to be married to almost anyone, including Johnnie (britches notwithstanding). However, an unexpected letter from America throws all plans into confusion, and it is left to Johnnie himself to untangle the web of conundrums that ensues. This laughter filled comedy has thrilled audiences for decades. The Wexford People (Feb. 1949) described it as “The play that has thrilled the entire country”.

About the Author
P.G.O’Dea was born in Limerick in 1898. He worked as a teacher at Athlone Vocational School. His Court Devenish home, close to the river Shannon, provided the spiritual inspiration for the genial wit and intellect of the author. It was from this base that P.G. wrote a number of plays, a vast library which included such works as “Johnnie’s Britches”, “Poor Jimmy”, “Paddy the Englishman”, “The Diddler”, “Down the Middle”, “A Man of Ideas”, “Kitty Breaks the Ice”, “Above Every Other Evil”, “Bachelor Barney”, “Simey’s Shadow”, etc..

P.G.O’Dea’s plays have been performed at numerous venues all over Ireland, and in the U.K., and have been widely acclaimed on the competitive circuit. His plays provide a unique insight into Irish rural life during the 40’s, 50’s, and 60’s. They are true windows into the mindset of the time, carefully observed by a wonderfully gifted craftsman. They are all intrinsically historical documents of that era, and they invite an audience to experience the tremendous sense if fun inherent in the mind of P.G., a teacher, and a shrewd observer of people.

He was also a gifted artist, and exhibited with such stalwarts as Fergus O’Ryan, Tom Nisbet, Henry Healy, Sean Keating, Harry Kernoff, Jack B. Yeats, Paul Henry, and Maurice MacGonigal.
P.G. looked forward to the All Ireland Drama Festival each year, which was founded in 1952 by his friend and colleague Brendan O’Brien, and portraits of both Brendan and P.G. are hung in the Dean Crowe Theatr Athlone.

During the lifetime of P.G.O’Dea, such was the demand for his plays, that they could scarcely be printed quickly enough. Like many other noted authors and playwrights, P.G.O’Dea’s plays are destined to provide entertainment and laughter for many large audiences, many years after his death. 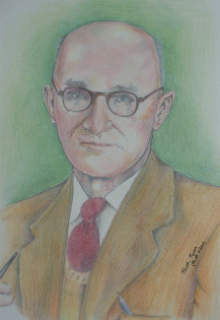