Home  /  Theatre   /   Madam de Markievicz on Trial
Back to events

Madame de Markievicz on Trial is a drama centred around Constance Markievicz depicting an event in Dublin at Easter in 1916 when a policeman was fatally shot. It is set in a courtroom and a prison cell during the autumn of 1917 and the dialogue is largely based on the extensive speeches made by Markievicz during this time.

The play has a cast of five women and two men. Apart from the prosecutor, all the characters are based on actual people and each one is impressive in their strength of character. William May, the prosecutor and sole fictional character in the drama is the Devil’s Advocate. He trawls through all aspects Madam’s life and times from her birth to 1917 to challenge the misinformation created by post 1916 propaganda.

The testimonies of the witnesses are interwoven to show that Madam was a normal multi-dimensional woman in contrast to the usual one-dimensional icon frequently presented. The audience will be the ultimate judge, as they leave the theatre to decide to issue an innocent or guilty verdict.

About the Author
Ann Matthews is a historian. Originally, from Dublin she now lives in Kildare. She currently lectures at NUI Maynooth on Women and War and Republican women and iconography. She has contributed to The Journal of Irish Military History and The Irish Archive Journalamong others.She has also contributed chapters to The Impact of the 1916 Rising: Among the Nations, (ed) Ruan O Donnell (2008) and Associational Culture in Ireland and Abroad (eds) Jennifer Kelly R.V Comerford Eds) (2010). She is the author of Renegades (2010) and The Kimmage Garrison 1916: Making Billy Can-Bombs at Larkfield (2010).
With support from UNESCO 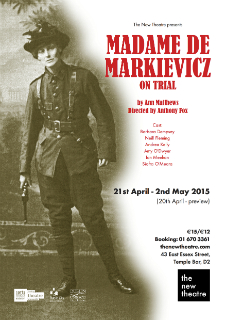