The Festival will showcase the latest films by both internationally established directors and emerging filmmakers, who are currently producing many of the most dynamic, innovative and provocative films in the world.

A woman walks alone in a deserted city, in a post-apocalyptic environment, with no recollections. She heads towards the west, where she will be safe, knowing only that she needs to avoid the morning patrol that guards the city. On her course to the unknown, she is approached by a member of the morning patrol who wants to help her reach the sea. Having a fractured memory in common, they will come close to each other, trying to explain what happened.
This screening will be preceded by an introduction to the movie by film scholar Mikela Fotiou.
Drama/Sci-Fi, 104 min, Greece, 1987, Colour. Directed by Nikos Nikolaidis. Cast: Michele Valley, Takis Spiridakis, Liana Hatzi. Language: Greek with English subtitles.

Andy, a hard working Cypriot immigrant in London who deep-fries his way into oblivion, decides to leave London for his native Cyprus. Having slaved away for others his entire life, he finally opens his very own chip shop. But his dream turns into a nightmare, as he seems to have overlooked one small detail: Cyprus just isn’t London!
Drama, 102 min, Greece/Cyprus, 2011, Colour. Directed by Elias Demetriou. Cast: Marios Ioannou, Marlene Kaminsky, Anne-Marie O’Sullivan. Language: English.

Antonis arrives at a hotel resort by the sea. It is wintertime, the hotel is closed and Antonis drifts around alone. He has a lot of time to kill. Until television announces the disappearance of the famous TV host Antonis Paraskevas…
Drama, 88 min, Greece, 2013, Colour. Directed by Elina Psikou. Cast: Christos Stergioglou, Maria Kallimani, Yorgos Souxes. Language: Greek with English subtitles.

After the death of their mother, 16-year-old Dany, leaves Crete to join his older brother, Odysseas, who lives in Athens. Born from an Albanian mother and a Greek father they never met, the two brothers, strangers in their own country, decide to go to Thessaloniki to look for their father and force him to officially recognize them. In Thessaloniki they discover that auditions are being held for the cult show, Greek Star, and Dany dreams that his brother, a gifted singer, could become the new star of the contest in a country that refuses to accept them.
Drama, 128 min, Greece/France/Belgium, 2014, Colour. Directed by Panos H. Koutras. Cast: Patty Pravo, Kostas Nikouli, Nikos Gelia, Yannis Stankoglou. Language: Greek with English subtitles. 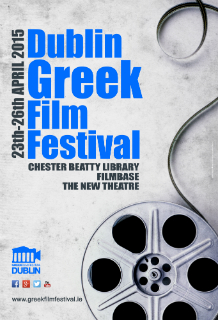