Called “Hairy Jaysus” by James Joyce because he became an atheist, Frank was also called a crank. He replied “a crank is a small instrument that makes revolutions”. He was close friends with both James Connolly and James Joyce.
A longtime campaigner with his wife Hanna for votes for women, he supported the Dublin workers during the 1913 Lockout. Jailed in June 1915 for making anti-war speeches, he went on hunger-and-thirst strike until released. He was shot dead in Portobello Barracks Rathmines in Easter Week 1916.
Coming up to the 1916 centenary, Sheehy-Skeffington’s spirit of resistance to accepted norms is needed more than ever, according to O’Kelly. “The man Seán O’Casey called ‘the soul of revolt against man’s inhumanity to man, the ripest ear of corn that fell in Easter Week’ is crucially relevant today” 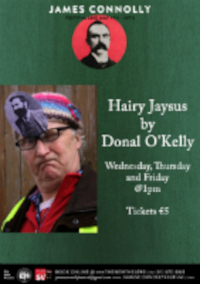