When a man who’s recently had a heart transplant thinks that his new heart is talking to him, is he going insane, suffering side-effects from the medication or could it be possible? Could this really be happening? When his new heart persuades him to embark on a major quest, his life and his world are turned upside down and inside out. He is soon operating well outside his comfort zone where his beliefs, assumptions and view of himself are all called into question, tested and challenged.
Have A Heart is a wonderfully dynamic and visual piece of theatre about love, obsession and head versus heart that will demand a real tour de force performance. Structured like a detective story, it’s sure to keep the audience guessing and fully engaged throughout.

Written and performed by Seamus Moran
Directed by Liam Halligan

Seamus Moran has possibly been in every living room or kitchen in the country… not as himself but as beleaguered Bistro owner Mike Gleeson in RTE’s Fair City. For 12 years he suffered the wrath of a string of strong women from Helen through Ava, Yvonne, Geraldine and back to Yvonne, before finally finding a way out, through the restaurant’s faulty fuse box. Since escaping the clutches of his voracious and avaricious suitors, Seamus has played a range of interesting and challenging roles from the philandering, irresponsible bookie in The Galway Races by James Phelan to gangster, bully and would-be country singer The Don in The Boys by Gerard Humphreys at The New Theatre and a tragic, grieving father in Corp + Anam 2 by Darrach Mac Con Iomaire. Have A Heart is Seamus’s second one-man play but the first one he’s written. He’s really looking forward to returning to the New Theatre.

Liam Halligan began his career as an actor working with Deirdre O’Connell and Mary Elizabeth Burke-Kennedy, among others, at the Focus Theatre. He then worked extensively in Ireland and UK with major companies including the Abbey Theatre, Lyric Belfast, Cheek By Jowl, Birmingham Rep, Theatr Clwyd, Lyric Hammersmith and The Donmar London. He has a central role in Sean Garland’s film Banshee Blacktop, which will be released later this year. He began working as a director with Focus Theatre and Galloglass. He founded Quare Hawks Theatre Company in 2000 and was Artistic Director of Storytellers from 2004 to 2008. He created many original productions and introduced the work of the Australian playwrights Andrew Bovell and Lally Katz to Ireland as well as the work of the renowned English playwright Philip Osment.

Liam has twice been nominated for an Irish Times Theatre Award as Best Director: Rashomon (Storytellers) and Speaking in Tongues (Quare Hawks). More recently he directed a dazzling production of Schiller’s Mary Stuart for Pageant Wagon which had a sell-out run in the Freemason’s Hall Dublin and Naomi Elster’s first play Scabs at Theatre Upstairs which celebrated the Dublin 1913 Lockout. Liam has worked with Seamus several times in the past and is really looking forward to bringing his one-man play to life on the stage of The New Theatre.
Liam Halligan – www.liamhalligan.ie 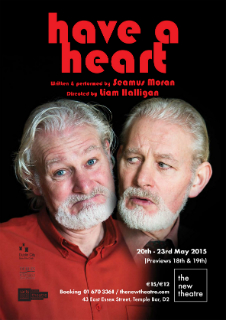