PalFest Ireland at The New Theatre

Home  /  Event   /   PalFest Ireland at The New Theatre
Back to events

London-based Irish-Palestinian writer Hannah Khalil’s play, Bitterenders, a black comedy about a Palestinian family in Jerusalem who are forced to share their house with Israeli settlers, won the Sandpit Arts’ Bulbul 2013 competition and was staged at The Nightingale Theatre in Brighton. A compelling mixture of Beckett-meets-McDonagh set in Jerusalem under the Israeli occupation regime.

‘She’s speaking to me. The olive tree….’
It’s 2014, and the fourth Israeli bombardment in ten years has begun in Gaza. A naïve but well-meaning BDS supporter refuses to buy Israeli goods in Dublin. And the Palestinian olive tree of history comes to life before her…
A lyrical sprint from the fluorescent lights of Clontarf’s Spar to the dusty rubble of Gaza, The Olive Tree is a reaction to the helplessness felt by many watching the attacks last year on our TV screens. A short theatre performance written and performed by Katie O’Kelly and underscored with music by the wonderful Imogen Gunner, it will be followed by a post-show talk on the Boycott, Divestment and Sanctions campaign. 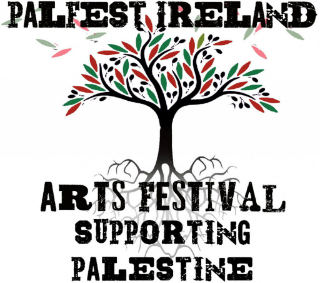