PalFest Ireland is an arts festival organised by Irish artists in solidarity with the besieged people of Gaza, the Palestinian territories and the Palestinian diaspora in exile.
It will mark the first anniversary of the Israeli bombardment of Gaza that left over 2100 Palestinians dead, including more than 500 children.

PalFest Ireland will be a lively, diverse, positive and culturally rich arts festival involving artists across a broad range of artforms. The festival will include music, theatre, film, dance, literature, spoken word and visual arts events in many venues to promote a cultural connection between Ireland and Palestine. The festival will take place from Wednesday 8th-Saturday 11th July 2015.

London-based Irish-Palestinian writer Hannah Khalil’s play Bitterenders, a black comedy about a Palestinian family in Jerusalem who are forced to share their house with Israeli settlers, won the Sandpit Arts’ Bulbul 2013 competition and was staged at The Nightingale Theatre in Brighton. A compelling mixture of Beckett-meets-McDonagh set in Jerusalem under the Israeli occupation regime.

It’s 2014, and the fourth Israeli bombardment in ten years has begun in Gaza. A naïve but well-meaning BDS supporter refuses to buy Israeli goods in Dublin. And the Palestinian olive tree of history comes to life before her…

A lyrical sprint from the fluorescent lights of Clontarf’s Spar to the dusty rubble of Gaza, The Olive Tree is a reaction to the helplessness felt by many watching the attacks last year on our TV screens. A short theatre performance written and performed by Katie O’Kelly and underscored with music by the wonderful Imogen Gunner, it will be followed by a post-show talk on the Boycott, Divestment and Sanctions campaign.
more info 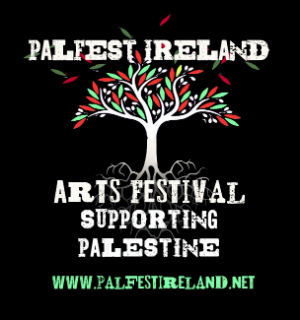