Following on from Company D’s critically acclaimed production of “Collected Stories” by Donald Margulies in 2014, Richard Greenberg’s “Three Days of Rain” opens up even more wonderful pathways for Company D’s actors to explore.

This Pulitzer Prize nominated play is innovatively split between two generations in two equal halves. Walker has found the dusty journal of his father and reveals to his sister, Nan that the truth about their father, Ned, might not be quite the impression they have, even though Ned has left the inheritance to Pip, Nan’s secret lover. Pained by the revelation of their relationship, Walker, who has secretly loved Pip for many years disappears into the night.

In the second half of this beautifully poetic play, the same actors morph into the roles of Ned, Lina and Theo and all is revealed about the truth of their motives and relationships.
Touching, provocative, hauntingly measured and profoundly mysterious, “Three Days of Rain” questions memory, love, romance and the impressions that others read into the unavoidable moments when human beings react on the irresistible plateau of true connection. 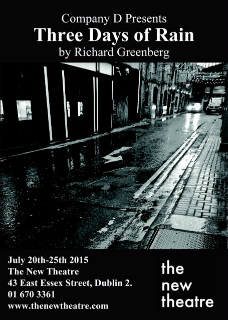